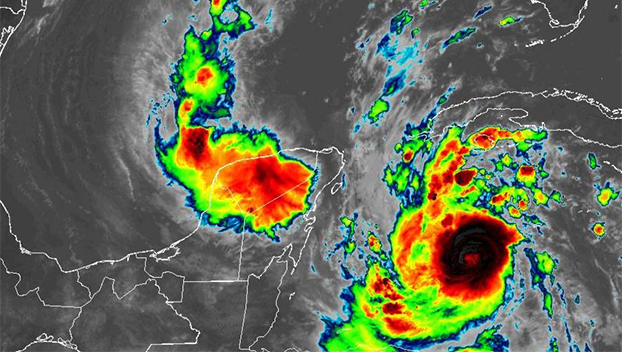 Hurricane Delta rapidly intensified into a Category 3 hurricane with 115 mph winds Tuesday on a course to hammer southeastern Mexico and then grow to a potentially catastrophic Category 4 on approach to the U.S. Gulf coast this week.

Once it moves on from Mexico, Delta is expected to become even stronger over the Gulf of Mexico, sustaining winds up to 130 mph as it approaches the U.S. Gulf Coast, where landfall around Friday would be followed by heavy rainfall across the southeastern United States.

“While there is large uncertainty in the track and intensity forecasts, there is a significant risk of dangerous storm surge, wind, and rainfall hazards along the coast from Louisiana to the western Florida Panhandle beginning Thursday night or Friday. Residents in these areas should ensure they have their hurricane plan in place and monitor updates to the forecast of Delta,” the National Hurricane Center said.

Beach communities on the Alabama coast are still clearing away the damage from Hurricane Sally, which made landfall at Gulf Shores on Sept. 16, as they warn people to be ready for Hurricane Delta.

Erosion from Sally, which gnawed away at beaches and dunes, still hasn’t been repaired and could worsen the flooding threat from Delta, since there’s less sand to stop the water, according to an update from the town of Gulf Shores.

Dump trucks have removed about 190,000 cubic yards of splintered buildings, docks and trees in neighboring Orange Beach, but the remaining debris could complicate preparation and recovery from Delta, said Mayor Tony Kennon.

“I worry about this one. I think we’re all snake bit,” he told a town gathering Monday night.

On narrow Dauphin Island, a barrier south of Mobile that was swamped by rising seawater and falling rain during Sally, officials said debris from fallen trees and splintered homes had been cleared off of only 25% of the disaster area by Sunday. Work replacing shattered docks and boardwalks was nearly complete at a boat landing and fish pier on the eastern end of the island when the town, again, began offering sandbags to residents.

The immediate worst impacts were expected along the resort-studded northeastern tip of Mexico’s Yucatan Peninsula, where hurricane conditions were expected Tuesday night and landfall early Wednesday.

From Tulum to Cancun, tourism-dependent communities still being soaked Tuesday by the remnants of Tropical Storm Gamma could bear the brunt of the storm.

In Cancun Tuesday, long lines stretched at supermarkets, lumber yards and gas stations as residents scrambled for provisions under mostly sunny skies. Officials warned that residents should have several days of water and food on hand.

Mexico began evacuating tourists and residents from coastal areas along its Riviera Maya Tuesday. Quintana Roo Gov. Carlos Joaquin said that buses were already carrying people off Holbox Island and all of the hotels in Puerto Morelos were busing their guests inland to government shelters.

Cancun hotels had already been told of their designated shelters and were transporting their guests. Some hotels that had exemptions because their structures were rated for major hurricanes were preparing to shelter their guests in place.

Cancun Mayor Mara Lezama Espinosa said that the city had opened more shelters than usual to give people more space in recognition of the COVID-19 pandemic. She urged people to move to shelters.

State Tourism Minister Marisol Vanegas said there were currently 40,900 tourists in all of Quintana Roo. That number is a fraction of what it would normally be due to the COVID-19 pandemic. The area’s economy was devastated by months of pandemic-caused lockdown.

The state ordered all non-essential businesses to close by 1 p.m. and banned the sale of alcohol. Essential businesses such as supermarkets can remain open until 5 p.m. Joaquín said he expects hurricane-strength winds to be felt Tuesday evening and landfall to occur near Puerto Morelos just south of Cancun between 1 a.m. and 2 a.m. Wednesday.

Mexican President Andrés Manuel López Obrador said Tuesday that 5,000 federal troops and emergency personnel were being made available in Quintana Roo to aid in storm efforts.

“I honestly don’t see much that will stop it until it reaches Yucatan, due to low vertical wind shear, high deep-layer moisture, and the very warm and deep waters of the northwestern Caribbean,” National Hurricane Center forecaster Eric Blake said.

Cuba’s westernmost province and the Cayman Islands were under tropical storm warnings on Tuesday as Delta shifted west.

Data from a U.S. Air Force Reserve hurricane hunter plane indicate that Delta will continue to strengthen as its forward speed increases, the Hurricane Center said. It’s expected to hit the Yucatan as a major hurricane, with an extremely dangerous storm surge raising water levels by as much as 6 to 9 feet (2 to 3 meters) in the Yucatan, accompanied by large and dangerous waves, and flash flooding inland.

Delta “presents an important danger for the coastal regions” because of the storm surge in the lower parts of Quintana Roo, such as the resorts of Cancun, Holbox island or Isla Mujeres, Jorge Zavala, head of Mexico’s meteorological service, said in a press conference late Monday.

AP writer Seth Borenstein in Washington contributed to this report.

While you were sleeping, Hurricane Delta grew into Category 2 storm