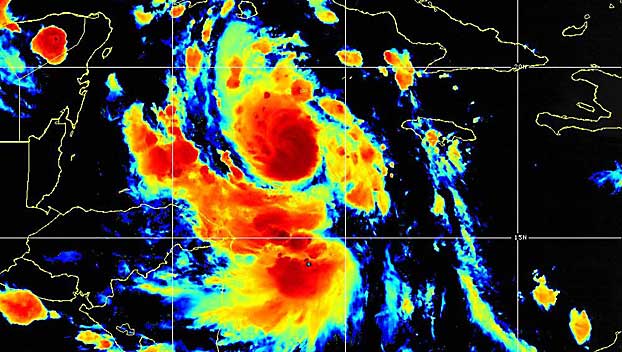 While you were sleeping, Hurricane Delta grew into Category 2 storm

Hurricane Delta rapidly intensified into a Category 2 hurricane early Tuesday, packing 100 mph (155 kmh) winds on a course to hammer southeastern Mexico and then strike the U.S. Gulf coast later in the week.

The immediate brunt of the hurricane was expected to be felt by the resort-studded northeastern tip of Mexico’s Yucatan Peninsula, which was forecast to start seeing hurricane conditions Tuesday night with the storm reaching land in the early hours of Wednesday. A hurricane warning was in effect for Tulum and Cozumel, resorts still being soaked by the remnants of Tropical Storm Gamma.

Data from a U.S. Air Force Reserve Hurricane Hunter aircraft indicate that Delta’s will continue to strengthen as its forward speed increases, the U.S. Hurricane Center said. It’s expected to hit the Yucatan as a major hurricane Wednesday before moving over the Gulf of Mexico on Thursday. Forecasters warned of an extremely dangerous storm surge raising water levels by as much as 6 to 9 feet (2 to 3 meters), accompanied by large and dangerous waves, and flash flooding inland.

Delta “presents an important danger for the coastal regions” because of the storm surge in the lower parts of Quintana Roo, such as the resorts of Cancun, Holbox island or Isla Mujeres, Jorge Zavala, head of Mexico’s meteorological service, said in a press conference late Monday.

Forecasters said the hurricane was moving into an area with very warm water and nearly calm high winds that forecasters at the hurricane center called “a very conducive environment for strengthening.” Delta’s center early Monday was about 420 miles (675 kilometers) east-southeast of Cozumel, Mexico, moving west-northwest at 15 mph (24 kmh).

Once it has inflicted its damage on Mexico, Delta is expected to make landfall along the central U.S. Gulf Coast around Friday and bring heavy rainfall into the southeastern United States.

Mississippi brother, sister both die from COVID-19 over weekend