Hurricane Delta leaves damage across Louisiana, knocks out power across parts of Mississippi 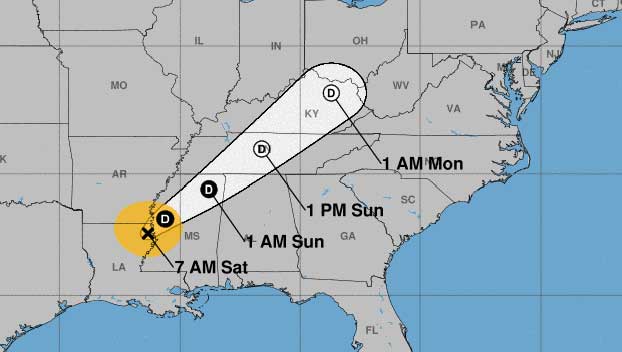 Ripping tarps from damaged roofs and scattering massive piles of storm debris in the wind and water, Hurricane Delta inflicted a new round of destruction in Louisiana communities along a path Hurricane Laura carved just six weeks earlier.

Portions of western Mississippi also felt the effects of Delta’s winds and rain. Entergy Mississippi reported more than 50,000 customers were without power as crews worked to restore service.

Delta hit as a Category 2 hurricane with top winds of 100 mph (155 kph) before rapidly weakening over land. It was barely a tropical storm Saturday morning, with top winds of 40 mph (65 kph), but heavy rain, ocean water from the storm surge and flash floods continued to pose dangers across much of southwestern Louisiana and parts of neighboring Texas. Mississippi also got its fair share of rain overnight.

Delta made landfall Friday evening near the coastal town of Creole — only 15 miles (24 kilometers) or so from where Laura struck land in August, killing 27 people in Louisiana.

It then moved directly over Lake Charles, a waterfront city about 30 miles (50 kilometers) inland where the earlier hurricane damaged nearly every home and building, and where moldy mattresses, sawed-up trees and other debris still lined the streets.

Lake Charles Mayor Nic Hunter spoke with The Associated Press as he rode out Delta’s arrival downtown. He said tarps were flying off homes across the city, and piles of wreckage were being blown around, some of it floating in the surge of ocean water.

“I’m in a building right now with a tarp on it and just the sound of the tarp flapping on the building sounds like someone pounding with a sledgehammer on top of the building,“ Hunter said. ”It’s pretty intense.”

In Lake Arthur, Delta’s winds peeled shingles off the roof of L’Banca Albergo, an eight-room boutique hotel in what used to be a bank.

“I probably don’t have a shingle left on the top of this hotel,” owner Roberta Palermo said as the winds gusted outside.