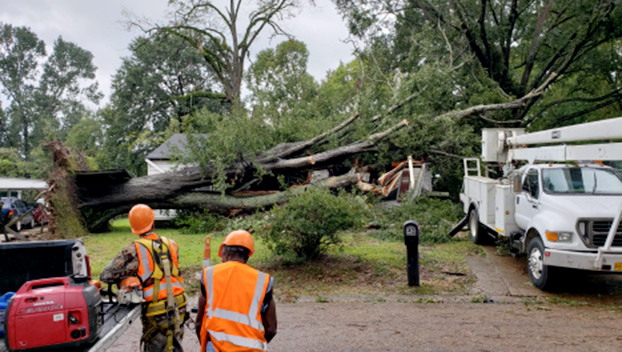 Workmen clear away a tree that fell on top of a house on Maplewood Lane in Natchez.

Preliminary reports to the Mississippi Emergency Management Agency say that more than 40 homes in Southwest Mississippi were damaged from the winds and heavy rains associated with Hurricane Delta.

Adams County was the county with the most reports of damage. According to preliminary data, three homes were destroyed and three homes received major damage. In all, 27 homes were impacted by the storm.

In addition to damage reports, the National Weather Service confirmed an EF-0 tornado in Franklin County from Hurricne Delta.

While multiple counties have received damage, the following official damage reports were submitted to the Mississippi Emergency Management Agency.  They are preliminary numbers and could change throughout the assessment process:

MEMA continues to work directly with local county EMA directors to assess further the damage caused by this tropical system. Residents can self-report damage to county emergency management agencies through MEMA’s self-reporting tool. View the self-report links for each county on the MEMA website at www.msema.org/contact/crisistrackcsr/.

Governor Tate Reeves declared a State of Emergency in anticipation of Hurricane Delta on Oct. 7. President Trump then approved Governor Reeves’ request for a pre-landfall disaster declaration on Oct. 9.