Mississippi mayor wants GPS monitoring for some out on bail 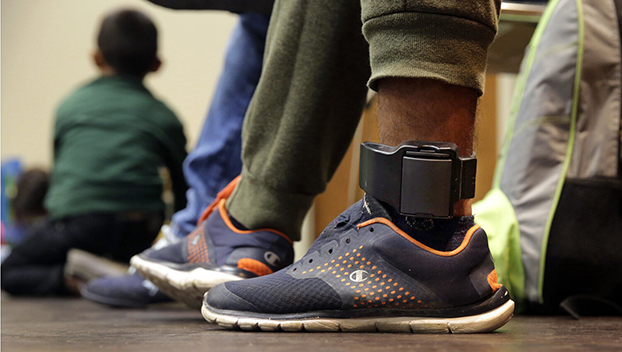 FILE - In this Monday, July 23, 2018 file photo, Carlos Fuentes Maldonado, an immigrant from Honduras seeking asylum who was released and reunited with his family, wears an ankle monitor as he waits at a Catholic Charities facility in San Antonio. Federal authorities’ shift away from separating immigrant families caught in the U.S. illegally now means that many parents and children are quickly released, only to be fitted with electronic monitoring devices _ a practice which both the government and advocacy groups oppose for different reasons. (AP Photo/Eric Gay)

In a letter to area judges, Vicksburg Mayor George Flaggs Jr. asked for additional monitoring and restrictions be placed on those individuals facing firearm-related charges before being released on bond.

So far, the response by local judges — at the city, county and circuit levels — has been agreeable. In the case of municipal court judges, the suggestion has led to immediate changes.

“For those persons before you who have been arrested for a firearm-related offense and are entitled to bail, in order to reduce the risk of harm to the public, I’m asking that you consider placing a GPS monitoring device and a curfew of 7 p.m. as conditions of bail on those defendants,” Flaggs said in his letter. “I believe the only exceptions to the curfew should be for travel to or from work or to seek necessary medical treatment. These conditions of bail will help in protecting the public from future violence and assist our law enforcement officers in reducing and preventing crimes in our city.”

Vicksburg Municipal Court Judge Angela Carpenter said after receiving the mayor’s letter Monday, she informed Vicksburg Police Chief Milton Moore and the department’s leadership that those changes suggested by the mayor would be effective immediately.

“We already use electronic monitoring in some situations and we will begin using it in these particular cases beginning immediately,” Carpenter said. “Hopefully, this will curtail some of the violence we have seen recently, particularly those involving firearms.”

She also agreed the curfew, which would be court-ordered, is an important part to the changes.

“We agree the curfew can play a role in reducing some of the activity that we are seeing right now,” Carpenter said. “Most of the occurrences that we are dealing with right now are after 7 p.m.”

“When bond matters come before the circuit court, we’ve already been utilizing ankle bracelets a pretty good bit and continue to do so,” he said.

“I have for some time been ordering ankle monitors to be placed on individuals on a case-by-case basis and when I find it to be necessary in order to protect the community,” Southerland said.

Southerland said requiring a monitor is legal because it is a condition of the bond and the defendant pays the cost of the monitor.

“I find that the mayor is right on track to bring it to the attention of all the judges in the manner that he did,” Southerland said.

Carpenter said the electronic device would be placed on an individual before they were allowed to leave the Warren County Jail after posting bond. She also said the county and municipal courts both use the same equipment and monitoring company.