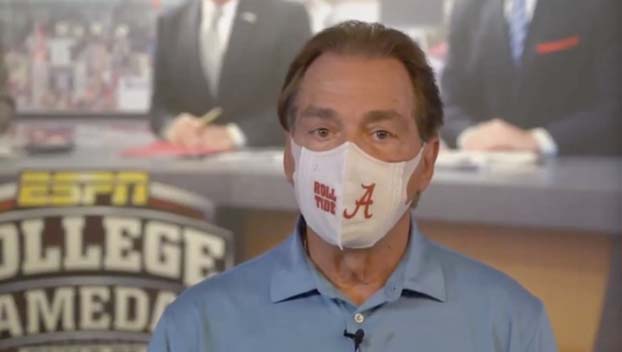 On Wednesday, Saban confirmed that he had tested positive for the COVID-19 coronavirus.

NCCA rules are very restrictive when it comes to coaching football games from a remote location.

“Rule 1-4-11-b is very specific and allows only voice communications between the press box and the team area, therefore in (a) the coach could not call into the press box or the sideline for anything related to coaching purposes,” reads a recent interpretation of NCAA rules by Steve Shaw, the national coordinator of football officials.

The interpretation was made in reference to coaches who are forced into quarantine after receiving a positive COVID-19 diagnosis.

“Rule 1-4-11-a would prohibit the use of technology including computers to be used for coaching purposes and this would include all virtual types of communication back to a team during the game, consequently in (b) any virtual session with the team would not be allowed. This prohibition would begin at 90 minutes before the scheduled kickoff when the officiating crew assumes jurisdiction of the game and would include the time between periods until the end of the game when the Referee declares the score final,” the interpretation reads.

The rules make no mention of coaching practices. Saban could handle practice duties from home on Zoom.

Speaking to reporters Wednesday evening, Saban said they were still researching the rules on coaching a game after testing positive for COVID-19.

Saban said offensive coordinator and former USC head coach Steve Sarkisian would “oversee operations” in the office while he was isolated at his Tuscaloosa-area home. Sarkisian will also continue to call the offensive plays against Georgia, Saban said.