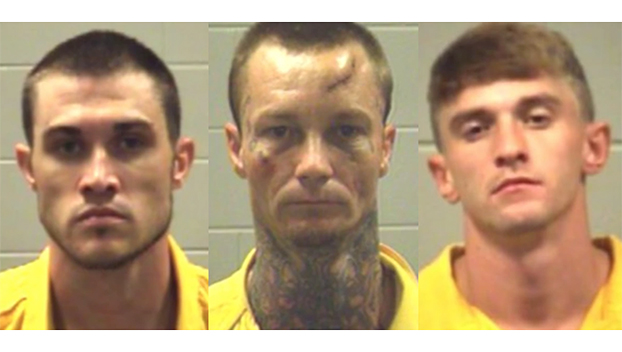 Three suspects in the death of a man found floating in a southeast Mississippi river have had their charges upgraded to capital murder, bringing the number of facing that charge in the case to four.

Zachary Cooper, 27, of Moss Point, Jason Lee Miller, 36, of Lucedale and Taylor Allan Carpenter, 23, of Escatawpa, had their charges upgraded Tuesday from accessory after the fact to capital murder in connection with the death of Dustin Lee Settles, Jackson County Sheriff Mike Ezell said.

An additional man, Joseph Paul McLeod, 33, of Pascagoula, was arrested Sept. 24 on unrelated charges, authorities said. A capital murder charge was added the next day, according to officials.

The charges were upgraded as authorities continued investigating the death of the 29-year-old Gautier man, who was discovered Sept. 22 between Vancleave and Wade in the Pascagoula River by the state Department of Wildlife, Fisheries and Parks, news outlets reported.

All four men were being held Tuesday without bail at the Jackson County jail following initial court appearances.

Officials did not comment further on the circumstances surrounding Settles’ death or what evidence led to the upgraded charges. It was also unclear how the men knew each other and the victim.
It was not immediately clear whether any of the suspects had attorneys who could comment for them.