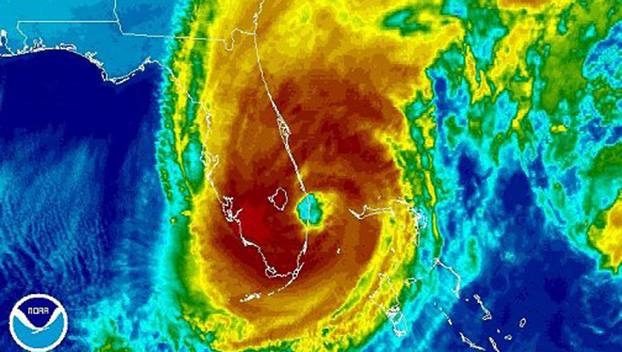 By the middle of October 2005, the United States had already had its fill of notorious and catastrophic hurricanes. The hurricane season that year was hyperactive, producing storms at a prolific pace that resulted in the majority of the designated storm names being used by the end of September.

The country was still grappling with the horrifying aftermath of Katrina’s destruction along the Gulf Coast when Rita slammed into southwestern Louisiana as a Category 3 storm on Sept. 24, bringing even more destruction and turmoil to the beleaguered Gulf region.

As it turned out, the most intense storm was yet to come.

Following Rita came Hurricane Stan, Tropical Storm Tammy and Hurricane Vince. Of those three systems, only Tammy made an impact on the mainland U.S. After Vince dissipated, that meant only one name was left before forecasters would be forced to utilize the Greek alphabet for the first time in history: Wilma.

Although the memories of Katrina might linger more in the minds of many Americans almost two decades after that notorious season, it’s Wilma that was the most powerful storm, albeit slightly. Katrina reached Category 5 strength during its time over the open waters of the Gulf, and its peak central pressure was 902 millibars (26.63 inches of mercury). It eventually weakened to Category 3 strength prior to landfalls in Louisiana and Mississippi. Katrina is also one of the deadliest storms in U.S. history. The exact death toll is unknown, but the storm is responsible for as many as 1,200 deaths.

During the second week of October, a broad area of disturbed weather developed over the Caribbean Sea, the typical tropical breeding grounds for the latter portion of the Atlantic basin season. By Oct. 15, a depression had formed, and just several days later, Tropical Storm Wilma was born on Oct. 17, according to the National Hurricane Center (NHC). What happened next was something forecasters still marvel at to this day.

As Wilma took advantage of warm Caribbean waters and low wind shear in the atmosphere, the storm underwent a record-setting and staggering period of intensification. The storm’s central pressure peaked at 882 millibars (26.04 inches of mercury), a record that still stands for Atlantic hurricanes 15 years later.

AccuWeather’s Lead Hurricane Expert Dan Kottlowski has forecast his fair share of powerful hurricanes during his 44 years with the company. Prior to Wilma’s arrival, Hurricane Gilbert in 1988, which pounded Jamaica before striking Mexico, was the most intense storm he ever forecast. Gilbert’s central pressure was 888 millibars (26.2 inches of mercury), the record until Wilma came along.

Thanks to their recollections of Gilbert, Kottlowski and his fellow forecasters knew that Wilma would strengthen rapidly and become a formidable hurricane.

“I remember the data coming in [from the Hurricane Hunter aircraft]. I could not believe the drop in pressure,” Kottlowski recalled. “Each time the plane went over the storm, the pressure just kept dropping, and we were just wondering, ‘When is it ever gonna stop dropping?’ It was wild, you know? That’s what I remember the most from Wilma,” he said.

Wilma holds the Atlantic record not only for lowest pressure but also for the fastest 24-hour intensification rate on record for an Atlantic hurricane, according to Colorado State University Meteorologist Phil Klotzbach.

Klotzbach noted that Wilma’s Accumulated Cyclone Energy (ACE), or the measure of how intense a tropical cyclone is over the course of its lifespan, was 39, a high value but still well below some other tropical cyclones that have prowled the Atlantic throughout the decades. This is because Wilma, while very powerful, was only a hurricane for seven-and-a-half days, he said.

Click here from more of this story from Accuweather