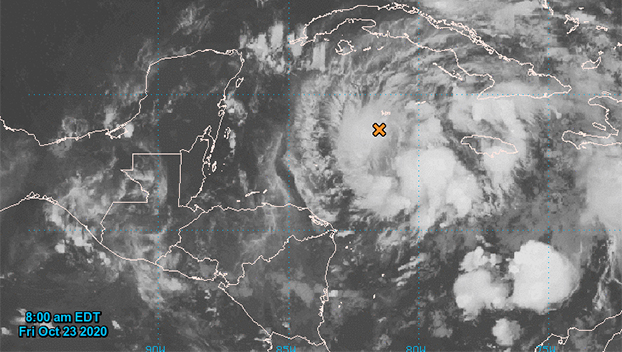 A tropical disturbance in the western Caribbean could cause problems in the Gulf of Mexico next week.

The National Hurricane Center said the tropical wave near Grand Cayman Island has the potential to move into the southern Gulf of Mexico.

Forecasters say the chances of a tropical depression developing are 60 percent over the next five days, which is up from 30 percent on Thursday. If it becomes a tropical storm it would be named Zeta.

“This system has become much better organized since yesterday, and a tropical depression could form during the next couple of days while the low moves slowly toward the northwest,” the National Hurricane Center issued in its statement. “This system is now anticipated to move near western Cuba this weekend and move slowly across the southeastern Gulf of Mexico by early next week.  Regardless of development, locally heavy rainfall will be possible over portions of the Cayman Islands, Cuba, southern Florida and the Keys, and the northwestern Bahamas through the weekend.”