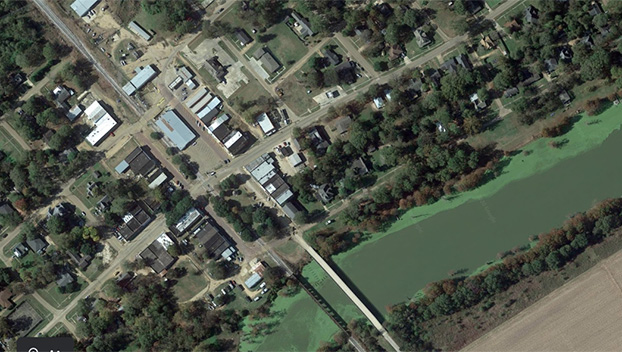 An entire city in Mississippi that was under threat of losing electricity before the end of the year because of unpaid bills will have more time to find a new power provider after the state stepped in, citing concerns about safety and public health.

“That is the fair, right and honest thing for us to do,” Brandon Presley, a Mississippi public service commissioner, said at a meeting Thursday night in Itta Bena, a city of 1,800 in the Mississippi Delta. “We are in the middle of a worldwide pandemic.

It is not an option for electricity to be shut off in the town of Itta Bena — it’s that simple.”

Municipal Energy Agency of Mississipi, a wholesale electricity provider, notified officials in Itta Bena in late August that it was pulling the plug on Dec. 1. MEAM said the city racked up $800,000 in debt over the course of 10 years.

MEAM officials have said they have tried at length over the course of years to collect payments and that the debt is hurting their business.

Itta Bena has faced a slew of economic challenges throughout its history rooted in racial inequality, white flight and a declining tax base. The city was founded around 1850 as a cotton-producing capital of the South that relied on slave labor.

After the Civil War, slaves were freed into a sharecropping system that resulted in generational poverty. Today, the city is 90% Black and 40% of people live below the poverty line.

Public officials paint differing pictures to the cause of the debt — Mayor J.D. Brasel said citizens owe at least $300,000 in unpaid bills to the city. As a middleman of sorts between residents and MEAM, the city purchases electricity from the wholesaler to sell residents and is responsible for the bill.

But former Mayor Thelma Collins, who left office in 2017, said officials have long known about the debt but prioritized other projects. She said lack of vision and planning exacerbate problems.

During Thursday’s meeting, Brasel said he doesn’t want the city to lose power, but there’s no way the city will be able to find $800,000 in the next month.

“We know we owe MEAM, we know we gotta pay them. …We intend to pay them, but I know we’re not going to have the money before Dec. 1 to pay them,” he said.

Presley said MEAM doesn’t want citizens to lose service, either, but that it doesn’t want to continue providing service without proper payment. A solution, Presley says, is finding a new provider for Itta Bena.

Entergy Mississippi, the largest private power provider in the state of Mississippi, has expressed serious interest in coming to the city, Presley said.

Entergy would pay a franchise fee each year equivalent to 2% of all residential and commercial customers’ bills for the year. Property taxes on poles, wires and other facilities would bring new revenue to the city.

The electricity rates would be managed by the Public Service Commission, instead of by the city, as they are now. Presley said under Entergy, residents in Itta Bena will pay the same for electricity rates as someone “living in the country club in Jackson, Mississippi.” This announcement drew applause from citizens in the crowd.

For months during the pandemic, residents have been protesting high light bills. Resident Birdia Williams, 64, who has received bills exceeding $650 on her one-story residence, said the city must be calculating them incorrectly. Brasel said he is aware of the high bills, but that they are being calculated correctly.

The Itta Bena board of alderman is expected to take a vote Friday on whether to begin the process of working with Entergy.
Presley said even if a new provider comes in, Itta Bena will still need to pay MEAM. He said MEAM is willing to find ways to structure payments and possibly forgive portions of the debt as long as the city acts in good faith to begin working with a different provider.

Presley said MEAM will not cut Itta Bena’s electricity while the city is working to transition to a new provider, a process he said wouldn’t be completed until January at the earliest.