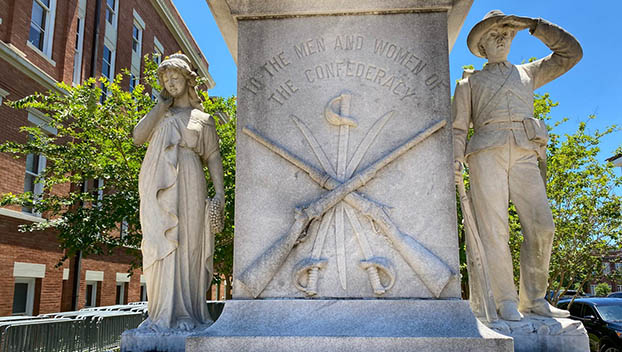 Voters have narrowly decided in favor of keeping a Confederate monument outside the Forrest County courthouse in southern Mississippi in place.

The non-binding measure was designed to give the Forrest County supervisors guidance on where their constituents stand after some residents called for its removal from public view.

Hattiesburg Mayor Toby Barker and city council members were among those who voiced their opposition to the monument remaining downtown. However, they have no authority to move the monument; the final decision is up to the Forrest County Supervisors.

The monument question on the ballot read: “Please vote ‘yes’ or ‘no’ on whether the Confederate monument should be moved to a more suitable location.”

The Southern Poverty Law Center says about 780 Confederate monuments and statues stand on public property in the United States, and at least 50 of those are in Mississippi. Many of the monuments were put up in the early 20th Century, as groups such as United Daughters of the Confederacy pushed a “Lost Cause” narrative that minimized slavery as a central cause of the Civil War.

Supervisors in at least three Mississippi counties — Washington, Bolivar and Leflore — have voted to move Confederate statues away from courthouses. Those in Lee and Lafayette counties have voted to keep statutes in place.

One of the Forrest County supervisors, Sharon Thompson, told WDAM that she thought the issue would come back to the board.

“It’s probably going to come back before the board,” Thompson said. “We had so many passionate people who were in the board meeting that spoke about the removal of the statue. They felt the same way that I felt, that it does not represent who we are today.”

In mid-July, the University of Mississippi moved a Confederate soldier statue from a prominent spot near the main administration building to a Civil War cemetery in a secluded part of the Oxford campus.

Mississippi legislators in late June retired a 126-year-old state flag that was the last in the U.S. to include the Confederate battle emblem. During the election on Nov. 3, Mississippians voted to accept a new state flag design without Confederate images.

Officials in Hattiesburg hoisted the flag outside Hattiesburg City Hall the day after the vote last week.