Mississippi lawmaker tweeted that state should secede over Trump loss 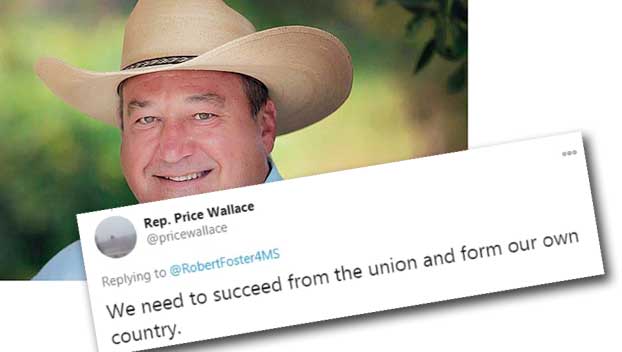 A Mississippi farmer turned GOP state lawmaker reportedly wrote on social media that Mississippi should “succeed” from the union after President Donald Trump lost to Joe Biden; he later removed the post.

Rep. Price Wallace, R-Mendenhall, apparently misspelled the word “secede” in his social media post, but the meaning was clear.

“We need to succeed (sic) from the union and form our own country,” Wallace wrote in a Nov. 7 tweet that has since been deleted.

Wallace was first elected in 2018 and represents Mississippi’s 77th District, which includes portions of Rankin and Simpson counties.

The tweet calling for Mississippi to secede was posted in reply to a comment written on social media by a former Mississippi lawmaker and failed candidate for governor Robert Foster.

Foster, a known and vocal Trump supporter, was making critical comments about the election process and the media’s coverage of it when Wallace responded with his plans.