Rare electric streetcar from 1900s removed from inside Mississippi house 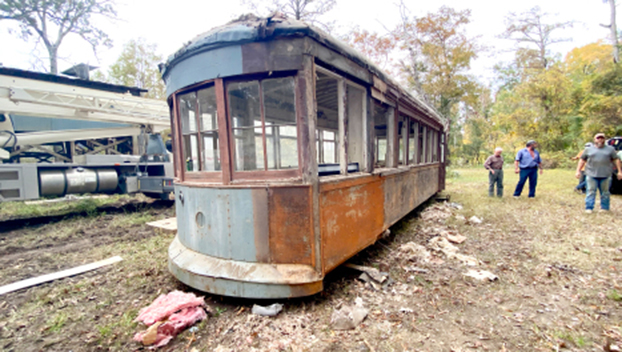 For the first time since the early part of the 20th century, an electric streetcar that once ran a route along Washington and Clay streets in Vicksburg has seen the light of day.

Tuesday, a crew from Paul Lynn Construction, working with the members of the Long Lake Hunting Club, removed the streetcar from a waterfront home, where it had served as a kitchen and screen porch for decades.

After navigating its way through Vicksburg’s streets, the streetcar was moved out to the woods, where it had served as the backbone for the home that served the sprawling hunting club along the Yazoo Diversion Canal.

The home, which has fallen victim to history and historic floods over the last 50 years is no longer used, but the streetcar itself, amazingly preserved from having had the elevated home built around it, will have a future, even if it is an uncertain future.

Crew members spent nearly seven hours Tuesday removing the roof, walls and girders that held the large streetcar in place. Just one end — a small portion — of the large car was exposed to the weather.

“It was not easy by any means,” Lynn said of removing the streetcar, which at one point dangled from a crane more than 25 feet off the ground. “It would have been easy to get it out, but to get it out in one piece was a challenge.”

As club members and members of Lynn’s crew inspected the now exposed streetcar, the original color was unveiled, a deep green, with much of the streetcar’s original wood flooring and ceiling still intact.

Streetcars first arrived in Vicksburg as part of the Vicksburg Electric Street Railway in 1899. Over the years, through name changes and the company changing hands, the network of electric streetcars continued to operate in some capacity through 1939. At the height of its service, at some point in the 1920s, there were as many as 22 streetcars operating in Vicksburg over nearly 12 miles of track.

The long-term future of the streetcar is still a point of conversation between public officials and private citizens, but the car itself will next be transported to the former Blackburn Motors dealership on Washington Street where it will be stored.