Unusual hummingbirds being spotted across Mississippi 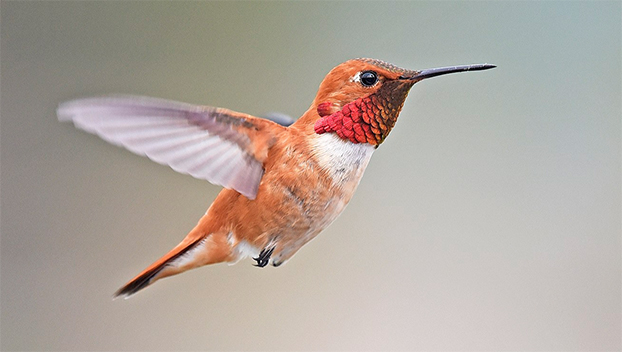 With cooler temperatures and falling leaves, it’s beginning to feel like winter in Mississippi and not the time of year when we typically think of hummingbirds. However, some are still coming to the state and small numbers of various species will spend the winter here.

“The rufous is the most common wintering hummingbird in the eastern U.S.,” said Erik Johnson of the National Audubon Society. “It’s a bird that breeds in the Northwest. The majority winter in Mexico.”

However, some come to Mississippi and this year Johnson said the numbers are higher.

“We’re seeing a lot more rufous hummingbirds on the Gulf Coast this year than in previous years,” Johnson said. “We’re getting reports from Central Mississippi, North Louisiana and Central Alabama.

“Presumably these birds are headed to the Gulf Coast for winter. A lot of people don’t realize there’s potential to see hummingbirds in winter. People just think of spring and fall migrations.”
Johnson can’t pinpoint why there are more sightings of rufous hummingbirds in the Southeast this fall, but speculated there are a couple of driving forces.

“One is the climate is warmer,” Johnson said. “Two, people are realizing they can attract hummingbirds in winter. They are also planting hummingbird gardens; particularly red-flowering and yellow-flowering plants that provide a lot of nectar.”

‘HE RULES THE ROOST’

Ruby-throated hummingbirds began pouring into Mississippi in late August as they migrated to Central America to spend the winter. About a month later, Amy Dowe of the Cayuga community in Hinds County saw something she’d never seen — a rufous hummingbird.

“That rufous sure was pretty. I’ve just never seen one. It was a cool treat.”

Dowe also noted the brown hummingbird appeared more aggressive than the ruby-throated birds that were competing with him for food.

“He was different,” Dowe said. “He ruled the roost.”

Although social media chatter about hummingbirds in Mississippi has died down since the majority of ruby-throats have made their way to Central America, rufous hummingbirds are still coming.
“We usually see the very first ones in August, but the bulk of the migration picks up in October and November,” Johnson said. “Now is really the best time to see them arrive.

And rufous aren’t the only species that migrate to Gulf Coast for winter. Johnson said small numbers of black-chinned, broad-tailed, buff-bellied and calliope hummingbirds will make their way here.

Bruce Reid, a Vicksburg resident and longtime bird-watcher, has seen three rufous hummingbirds at his home. One, in the early 2000s, arrived on Thanksgiving Day and stayed until April. He also spotted a calliope during that same period.

“It was feeding on sugar water in a hummingbird feeder. I keep one or two out all year on the off-chance.”

Reid said the chances of seeing a wintering hummingbird north of the coast are relatively low, but without a feeder, they are almost non-existent.

How to attract them? Keep a feeder out

“If you leave them up, it’s possible you could have one of these birds in your yard,” Reid said. “Just because it’s not much of an effort, I encourage people to keep a feeder out.”

According to Johnson, most of the hummingbirds that winter in Mississippi will be in the warmer coastal areas south of I-10. In those areas, the birds can be attracted by planting things such as firebush, firespike, cuphea and salvia.

“There’s lots of species available and they do well as long as it doesn’t freeze,” Johnson said.

In colder areas of the state, feeders filled sugar water made from one part sugar to four parts water are the best option, and Johnson said they should be cleaned twice a week to keep them fresh. He also pointed out there is a wives tale which says hummingbirds should not be fed in colder months because they will stay with the food source and possibly freeze — something he said is simply not true.

“It actually helps them fuel up for their migration,” Johnson said. “Their internal genes are driving them to migrate, not the availability of food.”