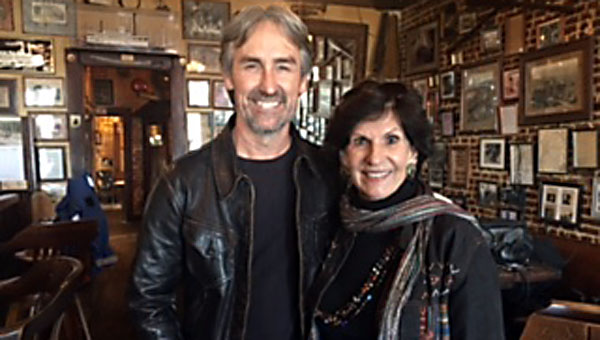 ‘American Picker’ star and producer, Mike Wolfe, poses for a picture with Candi Davis of Natchez at the Under the Hill Saloon over the weekend. Wolfe is in town filming interview segments for an upcoming episode of the History Chanel show. (Submitted Picture)

The star of one of the reality television show “American Pickers” is scouring the southwest corner of Mississippi looking for a few good treasures.

“American Pickers” star Mike Wolfe was spotted in Natchez  last weekend and posed for pictures with locals and other fans of the television series, who are posting them on social media.

Wolfe is in the area this week filming segments of the antique collector series featured on History Channel and produced by A&E Television Networks and Cineflix Media.

Anthony Rodriguez of Cineflix said Wolfe is filming interview segments in Natchez this week for an upcoming episode and the crew will be back later to film more scenes in the area.