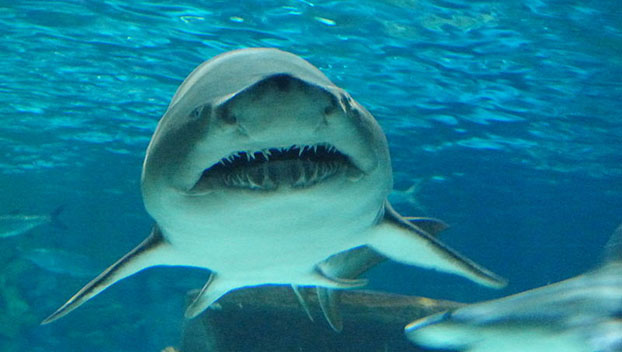 Getting the shark on the surgery table may have been the easiest task for a group of doctors who performed what is believed to be a rare — maybe the first-ever — spinal procedure on sharks.

The shark was given some medication and monitored for changes. After an initial improvement in Stella’s condition, it became evident that she was worsening as the spinal curvature became more severe and she was demonstrating an abnormal swim pattern. Without surgical intervention, the long-term prognosis was grave. A surgical repair of this nature has never been performed in a shark and brought along challenges due to shark anatomy. Shark skeletons are made of cartilage, not bone; therefore, it was unclear if the orthopedic devices used to correct spinal fractures in other animals would perform well in a shark. Drs. Delaune and Perry consulted with numerous veterinarians and human medical professionals and formed a team of experts to help accomplish the procedure.

On the morning of the surgery, the Mississippi Aquarium veterinary team was joined by Shane Boylan, DVM (Chief Veterinarian, South Carolina Aquarium), Grayson Cole, DVM, DACVS, CCRP, DACVS-SA (Small Animal Surgeon, Gulf Coast Veterinary Specialists) Joseph T. Cox, MD (Human Orthopaedic Spine Surgeon, Bienville Orthopaedic Specialists), John D. Smith III, NP (Singing River Gulfport Orthopaedics), and Jason W. Lowery (Implant Distributor, LSI) to perform the first of its kind surgery. The shark was brought to the veterinary hospital and underwent a two-hour procedure in which two metal plates were secured on both sides of the spine and platelet-rich plasma was injected into the fractured cartilage. The team is hopeful that the procedure will be a success long-term and she will continue to improve.

This case is an immense success in many ways. Before the procedure, the surgical team was hopeful that they could perform the surgery and the shark would recover from anesthesia. Stella met this goal and was swimming better immediately postoperatively than before the surgery.

“Regardless of the long-term outcome of this case, it should be considered a huge success. When I approached Kurt Allen (Mississippi Aquarium President and CEO) with the idea that we try something radical in order to help the shark, he was fully supportive and encouraged us to try. The veterinarians and human specialists that helped us did so without hesitation and at their own cost. I was humbled at the overwhelming response of people wanting to help our shark. This case exemplifies what can happen when medical professionals come together with their individual strengths to achieve a common goal. We learned so much from this procedure and have many ideas on how we could improve the procedure in the future, but overall we are so happy with her progress thus far,” says Alexa Delaune, DVM.

Drs. Cox, Cole, and Mr. Smith all brought surgical equipment to use for the procedure. Mr. Lowery donated the implants used on Stella’s spine. Everyone donated their time to make this surgery a success and give Stella a better quality of life. This is a wonderful example of “One Health” in which veterinary and human medical professionals work together to benefit a patient. The veterinary team at Mississippi Aquarium is extremely grateful that colleagues from near and far donated their time and equipment to make this procedure a success.