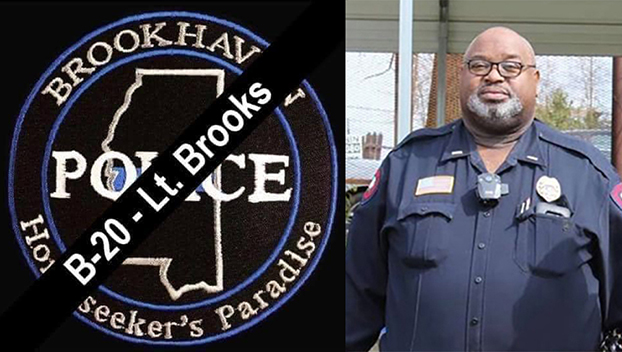 “Officer Brooks loved God. He loved his family and he loved the community that he served,” said Collins. “Most of all, he loved the kids in the Brookhaven School District where he protected them at all times, at every game, every event.”

Collins said Brooks, 58, contracted the coronavirus at an event where he was ensuring the safety of the children.

“He caught it serving his community and protecting these kids,” Collins said. “He died doing what he loved.”

“He will be missed — the joy that he brought,” said Chief Collins, “but he can never be replaced.”

A 28-year veteran of the department, Brooks also served as a school resource officer for Brookhaven School District.

“I want to express how much he loved his family and loved God,” Kelly said.

Brooks was one of eight children — four boys and four girls — and the last of the brothers. All of the sisters are still alive. The youngest brother, Varien Brooks, died in September from a heart attack; he also had COVID.

His sister Daisy Brooks- Thomas said Brooks wanted to be a police officer since he was very young.

“He would take his toy cars and make police lights for the tops of them,” his Brooks-Thomas said. “When our father died — we were very young — former Chief Arlustra ‘Pap’ Henderson took Marzell under his wing and he helped Marzell become a police officer. I am so thankful to Chief Henderson for doing that, that he helped make his dream come true. And he was a good one, too.”

“He was our protector. He watched out for all of us,” said Tonya Brooks, another of the officer’s sisters. “He drove by to check on us every day. He worked with my son and kept him out of trouble. He protected us. That was his job, but as his family, he made sure we were all OK.”

“He was my heart. He will be missed dearly,” Brooks-Thomas said. “He died doing what he loved most — being a police officer. He loved his family and he was loved.”

Funeral arrangements have not yet been made, the family said.