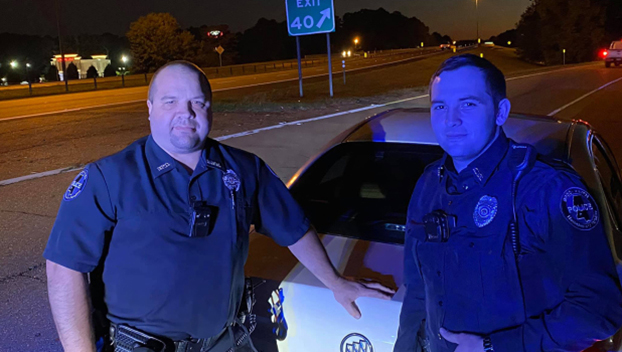 A Mississippi woman wants everyone to know how kind two police officers were to her recently.

Brookhaven resident Beverly D. Calcote has commuted to work in Jackson for 24 years, putting more than 100 miles a day on her car. She keeps her trunk stocked for any foreseeable problem, including flat tires. But the flat she had Nov. 16 needed — and got — more than what she had prepared for.

Calcote was on her way home that Monday and was crossing the I-55 bridge over Union Street in Brookhaven when she began to hear a noise she described as grinding, and “like rumble strips.”

After slowing to pass vehicles on the side of the interstate, another driver pulled up beside her and signaled to her that something was wrong with her tire. Calcote nodded and turned on her emergency flashers, hoping to make it to the Brookway Boulevard exit. Her intent was to pull into a parking lot and use her small compressor to air up the tire.

But the car began to shake much worse, Calcote said, so she pulled over near the top of the Exit 40 ramp at Brookway Boulevard, and called the Brookhaven Police Department. Because there was no shoulder between the edge of the pavement and a steep hill, she was concerned she would not have room to safely air up her tire, especially since it was beginning to get dark.

“I don’t have any family to call, so I called BPD and asked them to send someone to sit behind me with their blue lights on, so I could be safe as I aired up the tire,” Calcote said.

Soon, BPD officers Christian Davis and Alex Shelton arrived. After Calcote explained what she wanted, Shelton said he didn’t think her air compressor would be enough to fix the problem.

Before Calcote could do anything else, she said the officers started taking care of her car.

“Officer Shelton then proceeded to lie on the ground — to properly position the jack — and put my spare tire on the car. I offered a tarp to him, but he declined and simply continued changing the tire,” Calcote said. “As they finished, Officer Davis placed the bad tire back in my car and wouldn’t allow me to touch a thing.”

“In today’s climate, it’s trying times all around, but that’s not the experience I had,” Calcote said. “There’s no place I’d rather be than home, here. There’s no place like home.”