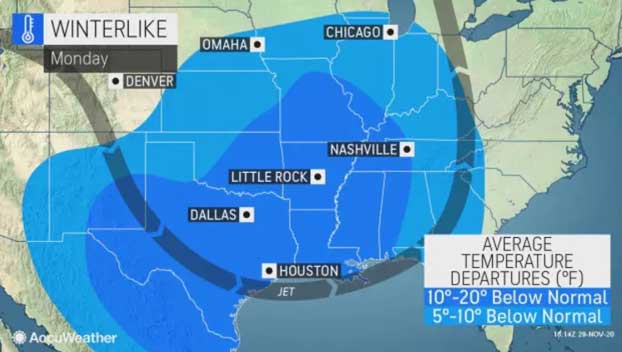 In the wake of a storm system set to deliver severe weather to portions of the Southeast on Sunday night, unseasonably cold air will pour in to end November and begin December.

After a strengthening area of low pressure produces thunderstorms capable of downpours, damaging winds gusts and even isolated tornadoes, much colder air will arrive in the wake of the storm.

“Behind this potent storm will be a rush of cold, Arctic air that will infiltrate as far south as the Mississippi Valley,” said AccuWeather Meteorologist Nicole LoBiondo.

In most areas, temperatures will be at their lowest values since last winter. In some instances, records may even be challenged.

The cold plunge will be felt as early as Sunday night in the southern Plains. Oklahoma City, Dallas and Houston are just a few cities that are expected to have temperatures lower than at any point so far this fall.

“As cold air dives southward across the Plains and Mississippi Valley from Sunday night into Monday, temperatures will be well below average south to the Gulf of Mexico and even northern Mexico,” noted AccuWeather Meteorologist Derek Witt.

By Monday night, the full effects of the cold air will be felt in earnest, and over a much larger area. A freeze is likely as far south as parts the Interstate 10 corridor. In many areas, the timing of the cold will be right on par with when the first freeze of the season normally occurs.

For example, the forecast low on Monday night is 31 degrees in Houston. Typically, the first freeze in the city occurs on Dec. 3.

Farther west, San Antonio averages its first freeze on Nov. 27. However, with a forecast low of 30 degrees on Monday night, this will be approaching record territory. The record low is 26 degrees, so it may fall just short of tying or breaking the record.

Little Rock, Arkansas, is another city that has yet to fall to or below freezing. This first freeze will be unusually late, as it normally occurs around Nov. 13. In fact, it will actually be closer to the latest that the first freeze has ever occurred than the normal date. In 1998, the city did not fall below freezing until Dec. 9.

While Little Rock will be near 32 F on Sunday night, the forecast of 23 degrees on Monday night will assure a hard freeze. A hard freeze is typically defined by a temperature at, or below 28 degrees. In addition, it will come close to the record low of 20 degrees.

On Tuesday and Tuesday night, the core of the cold will shift farther to the east.

With a forecast low of 30 degrees, Charleston, South Carolina, will be right on par with its typical first freeze date of Nov. 30. The low is also expected to be 30 degrees in Savannah, Georgia. That city normally has the first freeze on Nov. 27.

Farther south, this first freeze will come earlier than usual. In Jacksonville, Florida, the forecast low on Tuesday night is 29 degrees. The normal first freeze does not occur until Dec. 12. In addition, it has been almost a year since a freezing temperature was observed there, with the last one occurring on Jan. 22.

Although a freeze is not expected farther south in the Sunshine State, temperatures will be well below normal. In Orlando, the low of 37 degrees on Tuesday night is well below the normal of 55. Tampa will also be almost 20 degrees below normal, with a forecast of 40 versus the normal of 57. Even Miami will be chilly by its standards, with a forecast low of 51. A low temperature of 67 degrees is typical. Despite these temperatures much lower than they should be, records are not expected in those locations.

Daytime temperatures will be low, too. In fact, some areas will see their first snowflakes of the season. However, any accumulating snow will remain farther to the north. For example, with a high of 39 degrees, snow showers in Nashville, Tennessee, will not accumulate. Furthermore, snow is not expected anywhere to the south of Nashville.

Temperatures are expected to return closer to normal across the South on Wednesday and Thursday.

Doctors perform ‘miracle,’ reattach mother’s arm so she could…