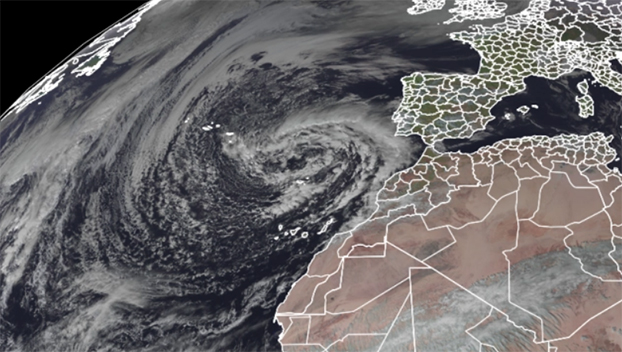 Even though the official end of the Atlantic hurricane season is Nov. 30, AccuWeather meteorologists continue to monitor the basin and an area between the Azores and Canary islands is a prime candidate for the next depression and named system for 2020.

This year’s hurricane season has been not only hyperactive when compared to normal, but also a record-breaker. The 30th storm of the season was Iota, which charged into Nicaragua on Nov. 16 as a Category 4 hurricane with 155-mph winds. However, since Iota dissipated over Central America, tropical activity has slowed considerably across the Atlantic basin.

Despite the late-season doldrums, forecasters were closely monitoring a system southeast of Bermuda for development last week. But, it seems that particular threat has diminished due to increasing wind shear in the region.

There has been another area meteorologists have been monitoring for development. A large, non-tropical storm has been spinning near the Azores since the start of this past weekend. Sometimes, under certain conditions, non-tropical storms of this nature can evolve into tropical or subtropical systems when over sufficiently warm waters and within a zone of low wind shear.

“This system southeast of the Azores has a chance of becoming a named subtropical storm at any time into Tuesday,” according to AccuWeather’s top hurricane expert Dan Kottlowski.

At present, AccuWeather meteorologists believe the chance of the non-storm evolving into a subtropical depression or subtropical storm between the Azores and the Canaries has increased to about 50%.

The next name on the list of Greek letters being utilized this season is Kappa.

Steering winds are weak in the region and the system may meander for several days northwest of Africa and southwest of Europe even after its demise, should it develop.

“Regardless of classification we expect the storm to bring gusty, perhaps damaging winds and bursts of heavy rainfall over parts of Madeira Island, Portugal, through Tuesday,” Kottlowski said.

There is another area that forecasters are keeping an eye on for tropical development thousands of miles to the southwest of the feature near the Azores and Canaries. Showers and thunderstorms have been erupting over the southwestern Caribbean Sea, just off the coast of Panama since late last week.

The odds of this system developing before drifting westward across Central America later this week are about one in three. “This area of disorganized showers and thunderstorms could evolve into a short-lived tropical depression Tuesday or Wednesday before moving inland over Central America,” Kottlowski said.

Regardless of development or not, downpours are forecast to propagate westward across Panama, Costa Rica and the southern part of Nicaragua during the middle days of this week.

“The rest of the Atlantic basin is expected to remain devoid of any organized tropical features for the rest of the 2020 Hurricane season, which officially comes to an end on, Monday, Nov. 30.,” Kottlowski said.

Other than the features aforementioned, additional post-season tropical development is highly unlikely through the first week of December.

The 30 named storms thus far during the 2020 Atlantic hurricane season shattered the previous record of 28 storms from the notorious 2005 hurricane season, which produced storms such as Katrina, Rita and Wilma. In addition, another record was set this season with 12 named storms making landfall along U.S. coastlines. Five of those landfalls were in Louisiana.

Should a depression form in the area near the Azores into early this week or at some other point in the Atlantic in the weeks ahead, 2020 would be in sole possession of the record-high number of tropical depressions, surpassing 2005’s count of 31. The 2005 season also holds the record for hurricanes with 15 and major hurricanes (Category 3 or stronger) with seven. So far in 2020, there have been 13 hurricanes with six of those reaching major hurricane status.

The season will officially conclude on Nov. 30, but forecasters caution that it’s not unrealistic that a post-season storm could form even in late-December. In the 2005 season, there were two named systems that roamed the Atlantic in December, including one, Epsilon, that became a hurricane.

Even if a storm forms after Nov. 30 through the end of Dec. 31, it would be considered to be part of the 2020 Atlantic hurricane season.