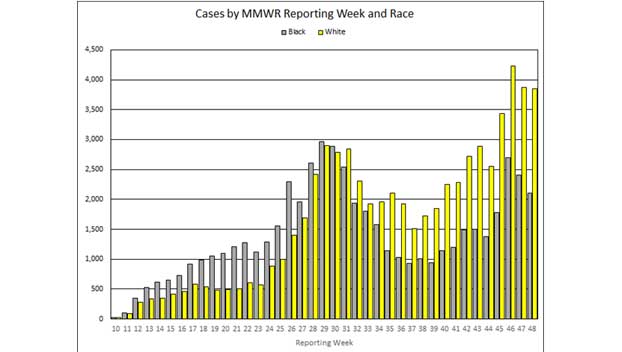 Mississippi’s battle against the COVID-19 coronavirus began in March when the first case was detected in the state and nine months into the pandemic, distinctive racial lines appear to be emerging from new case data.

Dobbs shared the graphic without comment but analyzing the graphic and previous state reporting shows that initially, new coronavirus cases in Mississippi were predominantly in people identified as being black.

Each week since that period of mid-summer equilibrium, the number of COVID-19 infections among white people has far outpaced the number in black people, sometimes nearly double the number in a given week.

The number of black COVID-19 cases as a percentage of the black population is still greater than that of the white population.

Through Nov. 29 statistics from the Mississippi Department of Health, 44,711 black residents in Mississippi had confirmed COVID-19, while 51,309 white residents had tested positive for the virus.

The overall population, however, is more white than black, approximately 37.5% black and 57.5% white.

Dobbs issued a warning to Mississippians Thursday on social media: “Protect yourself and your family! All residents of Mississippi should avoid any social gathering (non-essential) that includes individuals outside of the nuclear family or household.”