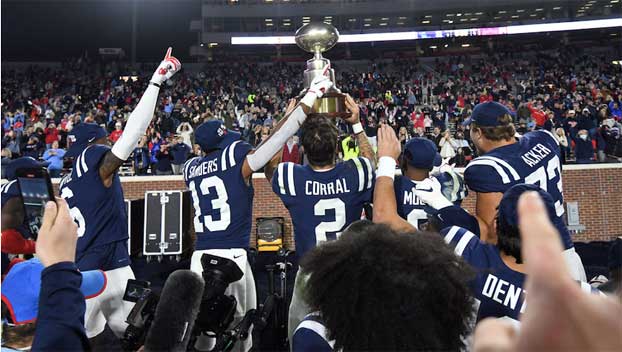 The Mississippi State, Ole Miss rivalry is alive and well in the NFL.

Just ask, New York Giants coach and Mississippi State graduate Joe Judge, who ended up on the wrong side of a bet and ending up paying the ultimate price during a recent press conference.

Ole Miss won the Egg Bowl 31-24 this year forcing Judge to wear an outfit of Ole Miss gear during the press conference.

“Before I open it up for questions, I’ll explain this ridiculous outfit I’m wearing,” Judge said. “This is the consequence of losing a rivalry bet with Evan Engram.”

A former tight end for the Rebels, Engram is in his fourth season with the Giants.

According to Judge, if Mississippi State had won the Egg Bowl, Engram was going to be forced to carry a cowbell all week long.