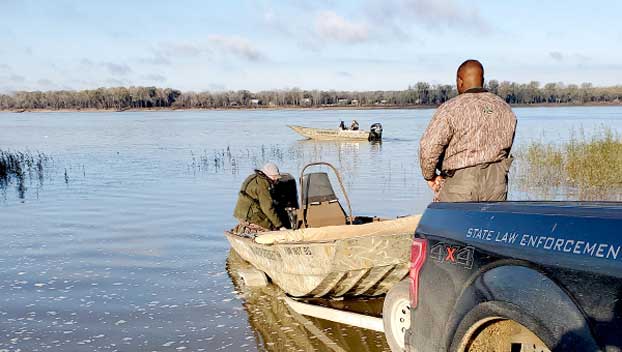 “We’ve recovered several items believed to be out of their boat and we recovered what is believed to be their boat this morning, but no sight of them,” Warren County Sheriff Martin Pace said Friday evening. He said the search teams have been searching the area south of the LeTourneau boat landing where the pair launched Thursday.

“We’ve had airplanes up, we’ve had drones up; we’ve had boats on the water and a ground search team on the bank,” Pace said.

Pace said he did not know if the pair managed to get to land, adding, “We are still treating this as a rescue mission at this point. We don’t have any way of knowing if they would have made it to the bank.”

Pace said the pair are not Warren County residents and that the search will resume at 7 a.m. Saturday.

The search for the boaters began Thursday evening after relatives called the Mississippi Department of Wildlife, Fisheries & Parks saying the pair put into the river at LeTourneau Thursday afternoon to go look at a duck hunting site near Davis Island. As of Friday evening, they had not returned or contacted family.

Pace said authorities believe the pair, described as a teenager and a young adult, along with their dog, launched from LeTourneau sometime after lunch Thursday. Pace declined to give the names of those missing, nor did he provide details of what items search teams have recovered.

“We found their truck and trailer still at Letourneau landing,” Pace said Friday morning. “Fish and Wildlife and the Warren County Sheriff’s Office had boats in the water until after 2 a.m.”

The search resumed at daybreak Friday, and authorities took a boat found by two duck hunters that was believed to be the one used by the pair adrift in the river near the Warren County/Claiborne County line.

Agents with the Department of Wildlife, Fisheries & Parks and sheriff’s deputies resumed the search Friday morning, assisted by two planes, a private plane owned by some people on Davis Island and a plane that had a Madison Parish (La.) deputy in it.

Deputies also searched Davis Island on the possibility the pair and the dog made it to the island.