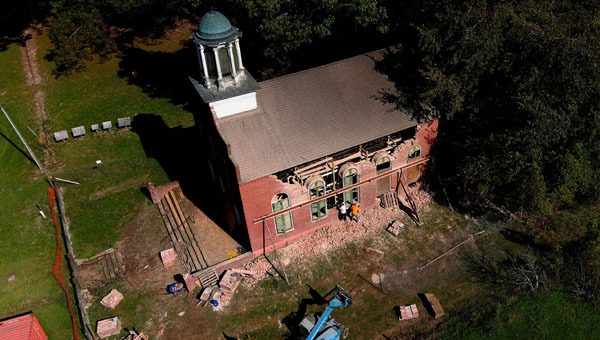 One of the highlights of visiting the Mississippi River ghost town of Rodney, located between Natchez and Lorman, is seeing the Rodney Presbyterian Church.

The church building was dedicated in 1832 and is recognized as a fine example of Federalist style architecture.

The structure has been neglected for decades and was on the verge of falling down until the Rodney History and Preservation Society purchased the building in 2018.

Work is now underway to restore the south wall of the Rodney Presbyterian Church to keep it from collapsing.

The church was built in a time when Rodney was an important port on the Mississippi River.

“The town of Rodney, located in Jefferson County grew and prospered after 1830 as an important shipping point along the Mississippi River,” according to the Rodney History and Preservation Society’s website. “After the Civil War Rodney had a rapid decline in commerce and population. Brought on by the change of river course, a fire in 1869, which destroyed most of the northern district and railroad through Fayette during the 1880s which caused all cotton shipments to bypass Rodney.”

Today, several buildings left over from the prosperous times in Rodney remain in the flood-prone, low-lying area and are being overgrown by brush weakened by neglect.

The Rodney History and Preservation Society organized in 2018 as a non-profit and with help from the late Mississippi Sen. Bob Dearing, D-Natchez, the Mississippi Legislature granted a portion of BP oil spill funds to the organization.

“We were able to acquire the (Rodney Presbyterian) church in November 2018,” said Mary Pallon, a relative of the church’s last pastor in the 1950s and one of five board members of the Rodney History and Preservation Society. “We pushed forward and 2019 was just gathering funds.”

Pallon said the society’s first concern with the building was making it structurally sound, and in January the society used some of the organization’s funds to place support beams on the south wall of the Rodney Presbyterian Church.

Since then, the society has hired architect Robert Adams of Jackson, who has advised on such historic projects as the Old State Capitol Building and the Eudora Welty house in Jackson, Pallon said.

The Rodney Presbyterian Church was listed as a National Historic Place in 1969 and was designated as a Mississippi Landmark recently by the Mississippi Department of Archives and History, Pallon said.

Over the years the church has undergone different modifications, including at one point having chimneys on both sides of the structure.

Also, during the Civil War, the church came under fire from the gunboat “Rattler” in 1863 after the Confederate Cavalry captured federal sailors while attending Sunday service.

Pallon said at some point in the past an effort to repair the church’s south wall included placing cement between the bricks and that led to further deterioration of some of the bricks.

Work began on taking the south wall down in September, Pallon said.

“Before they could take the wall down, they had to build a temporary inside wall,” Pallon said. “We have saved the bricks and will use as many of the original bricks as we can.”

“Whenever you go into a 200-year-old church, you find things,” Pallon said, adding engineers discovered the bell tower structural support was worse than they originally thought. “We can’t wait. We were hoping we would wait a year or so.”

Pallon said the society is now raising money to complete the structural work on the bell tower as well.

Donations can be made by visiting the Rodney History and Preservation Society’s website at rodneyhistory.org, or the society’s Facebook page or checks can be mailed to RHPS, P.O. Box 312, Lorman, MS 39096.