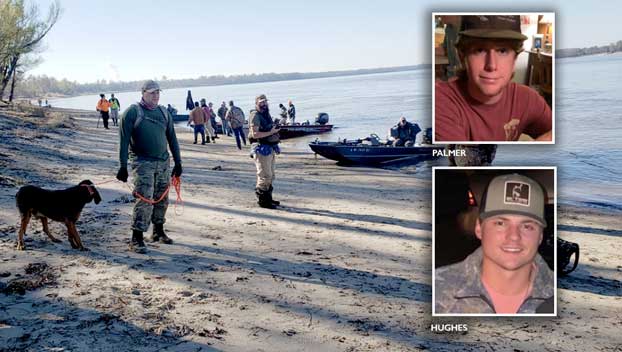 They are not giving up. That’s the message Warren County Sheriff Martin Pace and the dozens of other searchers have taken in the ongoing search for two missing boaters on the Mississippi River.

The missing boaters, identified as Zeb Hughes, 21, and Gunner Palmer, 16, were reported missing Thursday when the pair did not return from duck hunting on the river. The pair put in at the LeTourneau Landing Thursday.

Volunteers and emergency crews — including personnel from the Warren County Sheriff’s Office, Madison Parish and the Mississippi Department of Wildlife, Fisheries and Parks — have continued their search for three days. Saturday’s efforts were suspended just after sunset and are set to resume again Sunday at 7 a.m.

The search has focused on the area south of LeTourneau and has seen crews using boats, aircraft and drones, as well as crews searching the riverbanks and islands by foot.

Pace confirmed Saturday that a boat found Friday, along with other items discovered in the search area, belong to the missing boaters.

Warren County Fire Coordinator Jerry Briggs, who has worked to coordinate search efforts and volunteers, said additional items were found Saturday, all along the river bank, but those have not yet been connected to the missing men.

Crews Saturday searched more than seven miles south of the LeTourneau landing on the Mississippi side of the river, Briggs said. Crews also covered an area of five miles south of LeTourneau on the Louisiana side.

“As of right now, we are going to cancel ground searches moving forward and strictly focus our search on the water,” Briggs said Saturday evening. “Ground search efforts will stay discontinued until we find any additional evidence that leads us to believe they made it to the bank.”