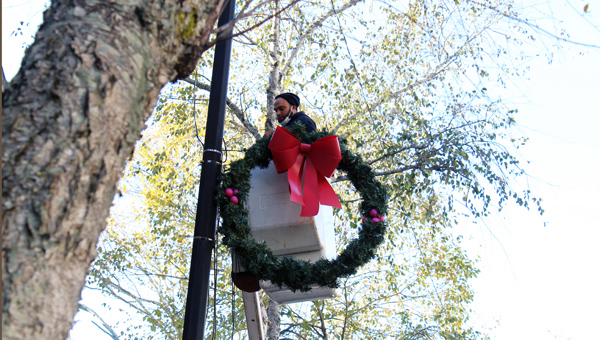 Illuminate Lighting worker Erik Machuca works to get power cords in place in order to decorate a section of Main Street.

Passersby on one Mississippi Main Street might have noticed bucket trucks on the side of the road lifting workers into the air Monday morning.

The workers, dressed in black hoodies emblazoned with the word “Illuminight” and a red light, were stringing wires, hanging Christmas wreaths and Christmas ornaments in Natchez Monday morning as part of online streaming service Netflix’s work to spread Christmas cheer.

Starting at the intersection of Main Street and Pearl and running down to South Wall Street, the road was blocked off with cones and caution tape.

Outside his restaurant, Biscuits and Blues on Main Street, Peter Trosclair sipped his morning coffee while watching the workers.

“I just walked out and saw the trucks. I really didn’t know,” Trosclair said. “I was kind of surprised but it looks exciting. I think that’s great. It has got to be good for the economy and it has got to draw some attention. We need all the business we can get.”

The decorations are not for a show and Netflix is not filming the decorations, workers said. Netflix is decorating select small cities in the nation in an effort to spread holiday cheer, company officials said.

Netflix contacted Natchez Mayor Dan Gibson’s office about decorating Natchez and as a member of the Christmas in Natchez committee, Debbie Hudson, president and CEO of the Natchez-Adams County Chamber of Commerce, said she got back in contact with Netflix to plan for the work.

“Why we got selected I have no idea,” Hudson said. “We are very grateful that we are. They even had to take down some of our decorations to put up theirs but that is OK.”

Hudson said Netflix is not charging the city for the work.

Natchez Mayor Dan Gibson said Natchez is the only city in Mississippi that Netflix is decorating. Work is expected to be complete on Tuesday, workers said.

It took the work of the mayor, public works and the chamber of commerce to make sure they had electricity in places Netflix wanted to work. This was due to the age of Natchez, Hudson said.

The decorating was supposed to begin last week, but a storm delayed their start until Monday, Hudson said.

“I think it is great that the kids get to see Christmas decorations,” Trosclair said. “I’m all about Christmas and decorations. It is a celebration, a big celebration. It means more to me this year. My grandson is coming from Minnesota. That is going to be the highlight of my Christmas.”