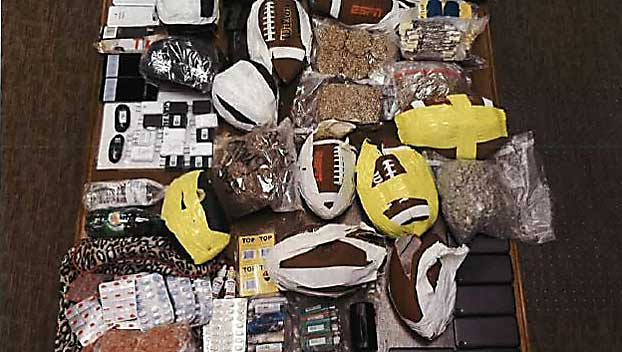 Unidentified smugglers at 1:30 a.m. threw more than 25 packages across a remote section of the perimeter fence at South Mississippi Correctional Institution near Leakesville.

The packages contained a wide assortment of illegal contraband from 38 cellphones to 4 pounds of marijuana to 7 pounds of barbequed chicken wings.

Some of the illegal goods were sewn into footballs which easily cleared SMCI’s double 18-foot-high fences.

But alerted by sensing technology, Corrections officers scrambled to the area, confiscated all the contraband and were able to describe the smugglers’ vehicle.

SMCI Superintendent Andrew Mills said Security Chief Michael McLendon spotted the slow-moving vehicle and a search is underway for it by state and local law enforcement.

“Our enhanced security measures are making us better at seizing contraband at all of our prisons any time of the day or night,” Deputy Commissioner of Institutions Jeworski Mallett said. “Clearly, we’re making a dent because smugglers on the outside are taking extreme risks to help some inmates carry on illegal activities.

“We are also developing plans to re-open perimeter guard towers with marksmen armed with high-powered rifles. Everyone knows that trespassing on prison grounds is illegal day and night.”

“We are making Mississippi prisons safer for inmates and Corrections officers by stopping the flow of contraband,” MDOC Commissioner Burl Cain said. “Gang leaders use contraband as a way to control other inmates and we’re choking off their operations they’ve used for decades to control prisons.

“Now we’re installing and using the latest security systems, drones overhead, and cameras and scanners everywhere plus we’re recruiting and hiring the best and brightest criminal justice graduates. Governor Reeves wants us to bring Mississippi Corrections into the 21st Century and we are.”

Among the contraband seized, officials found:

Those inmates found connected with the smuggling attempt will lose eligibility for early release and accumulated earned time.