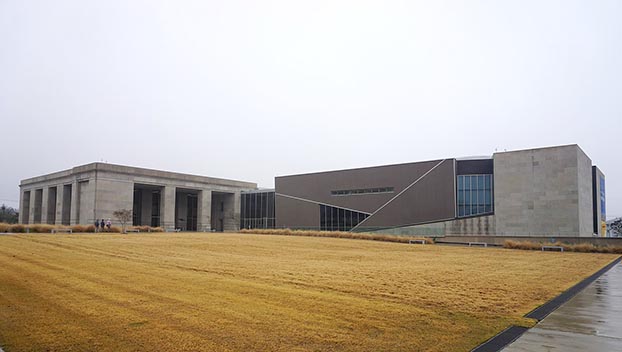 Yet still standing were Confederate monuments that fueled the white supremacist ideas which got Evers, King and countless other Black people killed or brutalized, or discriminated against.

In Mississippi, those monuments sit in 131 public spaces alone.

So, when Walker, poet and author of the neo-slave narrative, “Jubilee,” founded the Institute for the Study of the History, Life and Culture of Black People in 1968, she ensured that the truths of Black people like Evers and King didn’t drown in a sea of Confederate myths. Now known as the Margaret Walker Center, it is a museum and archival center based at Jackson State University in Mississippi.

“Margaret lived in Jackson on the same street as Medgar Evers,” said Robert Luckett, associate professor of history at Jackson State and director of the center.

“Margaret founded us in 1968, and to do that in Mississippi was an activist statement. For her to have the courage and wherewithal to make that happen is a remarkable testimony to her, and to the strength of the idea. It is reflective of the kind of crucial roles these museums have been playing in preserving and promoting African-American history and culture.”

Other museums of Black history, such as the Mississippi Civil Rights Museum in Jackson and the Emmett Till Museum Interpretive Center in Sumner, also exist to show the brutal truths of racism and Jim Crow, as well as the triumphs and resiliency of Black people in Mississippi.

RECKONING WITH CONFEDERATE PAST

And, in an age in which the nation is being challenged to reckon with its Confederate past, civil rights museums and archival centers will likely play an even larger role in helping to set the racial record straight, said Terri Lee Freeman, president of the NCRM.

“I think the role of the museum has always been to educate and to educate truthfully about the subject matter and about the topic,” Freeman said. “Just because you take down the Confederate statue doesn’t mean the history didn’t happen, so the role there is to be accurate and authentic in our interpretation of the history.

“I don’t think our role has changed any. The questions may be more frequent than they once were, but the answers are still the same.”

The movement to topple Confederate statues, as well as a summer of protests over unarmed Black people being killed by police officers and the disproportionate impact that the COVID-19 pandemic is having on Black people has likely generated more questions that civil rights memorials and museums are uniquely positioned to provide context, said Tafeni English, director of the Civil Rights Memorial Center in Montgomery.

The memorial, which is part of the Southern Poverty Law Center, was unveiled in 1989 and designed by Maya Lin, the architect of the Vietnam War Memorial. Inscribed on granite are the names of 40 civil rights martyrs killed from 1955 – the year that Till was murdered – to 1968, when King was killed.

That memorial, as well as the Equal Justice Initiative’s Legacy Museum and National Memorial for Peace and Justice, which opened in 2018, pays homage to victims of slavery, lynchings and racial terrorism.

“The interpretive center is a full experience where we not only share the stories of the martyrs on the wall, but we also talk about the work of SPLC, specifically on a wall which says ‘The March Continues,’ which speaks to the injustices of today,” English said.

“The Emmanuel Nine (Black parishioners who were murdered in a Charleston church by white supremacist Dylann Roof in 2015) are included on the wall… white supremacy and terrorism still has strong holds in our country, and we don’t talk about it nearly enough. ”

EDUCATING ABOUT THE HISTORY OF RACISM

English said that civil rights museums also play a role in educating people about the history of racism and white supremacy by presenting material and exhibits that add historical context to current issues.

“Overall, I think people see museums as being pretty static, that we tell a story and that’s it,” she said.

“Well, no, that’s not how it works. As our communities change and as social justice issues emerge, museums are able to tell the full story about all of it…”

Next year, for example, Luckett said the center will host an exhibit based on the Pulitzer Prize-winning book by Matthew Desmond: “Eviction: Poverty and Profit in the American City.” That topic encompasses the impacts of racism and inequality.

And the Mississippi Civil Rights Museum, which opened in 2017, also offers a space titled, “Where Do We Go From Here,” to help visitors reflect on their experiences and offer ideas on how to continue to improve society.

That museum, Luckett said, is also a testament to the determination of Black people’s determination to tell the Mississippi civil rights story.

“I would argue that museum, in the context of memorials and monuments, reflects a community-driven effort to reflect the kind of monument that we should all be proud of, because that museum is a $90 million project that is going to withstand the test of time,” said Luckett, who was on the team of scholars who helped to plan it.

“The Legislature stayed out of most of it, except for the funding, which was good,” he said. “It allowed us to drive a more honest narrative of civil rights in Mississippi. Community meetings were held throughout the state, and the main thing they wanted was for the truth to be told.

“There’s a deep honesty reflected in the civil rights museum.”

But how do civil rights museums bring new and contextualized experiences to people?
For one, virtually all of them offer field trips and supplement social studies curriculum in the schools, which is taught to various degrees in the Mississippi, Alabama and Tennessee school systems.

Many times, the students learn something that helps them to educate their parents on civil right history, English said.

“There was so much genuineness there, in that he saw the Ku Klux Klan as law and order, and that they only attacked people if they were bad. But for a fourth grader to walk away with a different perspective, and to say, ‘My dad was wrong,’ that was something.”
Many adults often learn more than they expect, Freeman said.

“There are people who come to this museum often thinking that what they’re going to simply see is the King room,” she said.

“They often are surprised to learn that this museum is not only a memorial to King and the tragic event that occurred on April, 4 1968, but that it takes people on a journey from Africans being stolen from their native land and brought to this country and spread throughout the diaspora, and then, what happened after enslavement and beyond.

“There are people who are aware and do come and learn quite a bit, but those who come and want to learn are doing that because they don’t have all the information.”

Dave Tell, a University of Kansas communications professor and author of “Remembering Emmett Till,” has worked with the Emmett Till Memorial Project since 2014.

He’s secured grants and created an app for the project as a way of guarding against the constant vandalizing of Till’s memorial sign.

And Tell said he believes civil rights museums have an important role to play in clarifying the past and contextualizing this political moment.

“Museums have become the new lunch counters,” Tell said. “When people want to protest or reflect on issues of race, don’t you think they go to monuments or memorials or museums?”

“You’ll look at what happened to George Floyd as being an isolated problem if you don’t know your history…museums are on the front edge of a contest that is being played out right now about what stories get dignified in public space.”

A Mississippi hunter is saying prayers of thanks this weekend after he was found hanging upside down in his tree... read more