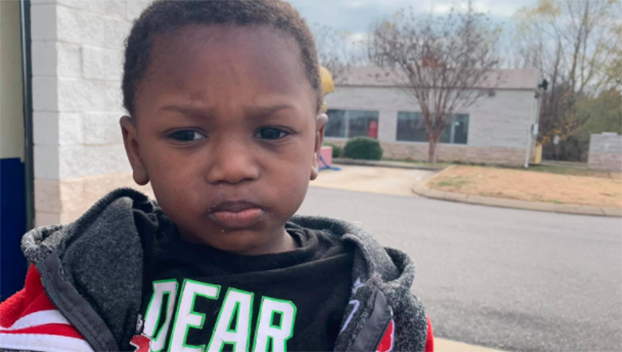 UPDATE 5:30 p.m: Officials say they have one person in custody related. to 2-year-old left at Goodwill store. Click here for story.

The Southaven Police Department is seeking the public’s help after a two-year-old boy who was left abandoned at a Goodwill store.

According to police, a man walked the child to the Goodwill located at 57 Stateline Road around 10 a.m. Monday and took off.

Officials say a light-skinned black male wearing black jogging pants and a black cowboy hat dropped the child off with a plastic bag containing a change of clothes and a note.
Police say the suspect then left the scene on foot. Responding officers but were unable to locate the suspect.
The male child is approximately 2 years old and is unable to give his name or the names of his parents or relatives.
Nearby surveillance video captured images of both a male and female associated with this incident and the vehicle they were driving when the child was abandoned.
Southaven Detectives are seeking any information on this child. If you recognize this child or have any information that will help Detectives, please call SPD at 662-393-8652, or email us at TIPS@southaven.org

Hunt on for suspected shooter in weekend shooting