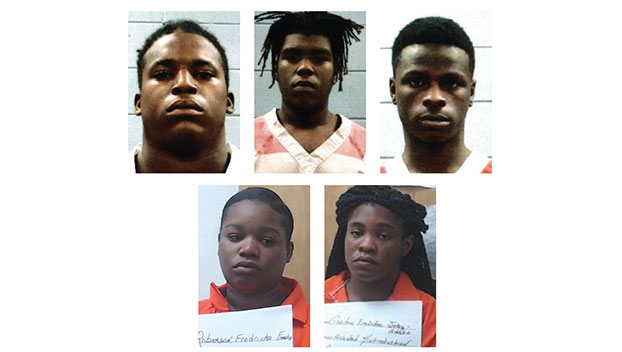 An electronic ankle bracelet led police to the five people who tried to smuggle marijuana, cellphone and chicken wings into a south Mississippi prison.

After Christopher Naje Wilson reportedly lobbed modified footballs containing 4 pounds of marijuana, 38 cellphones, and seven pounds of barbecued chicken wings over the 18-foot razor fence of South Mississippi Correctional Institution, he and three friends sped off into the night.

The only hitch was Wilson –who was out on bond on a murder charge– was wearing a court-ordered electronic ankle bracelet.  The bracelet, which alerts authorities if disabled, allowed law enforcement to track the smugglers from the prison near Leakesville back to Richland outside Jackson.  Stopping Wilson’s car, which he had stolen, Richland police officers found another football in the car containing synthetic marijuana called “spice.” In the Rankin County Jail, the suspects confessed to Mississippi Department of Corrections investigators.

MDOC officials reported the arrests in a news release Tuesday.

“Electronic GPS surveillance technology let us clearly see every movement Wilson made to and from the prison and to within feet of SMCI’s perimeter fence,” MDOC Investigative Director John Hunt said. “We also found a receipt in the contraband from the store where some items had been purchased and by whom.  And Richland Police found another marijuana football in the car.”

MDOC officials say the smuggling happened at 1:30 a.m. on Dec. 7 when Wilson and friends threw 25 packages over SMCI’s fence.  When the 7 pounds of chicken wings hit a sensor, Corrections officers rushed to the area and confiscated all 25 packages as well as catching a glimpse of the car.

Richland Police arrested Wilson, 18, along with Fredric James Roberson, 19, and Keshun Chambers, 18.  MDOC officials said the trio will be charged with drug possession, trafficking, and introducing illegal contraband into a prison.  Further tracking led CID investigators to also arrest Roberson’s 22-year-old sister Fredricka Roberson and Fredrikee Gooden, 21, on charges of introducing contraband into a prison.  They were jailed in Greene County.

Among the contraband seized, officials found:

“We are continually improving new technology to protect our prisons, but the tragedy in this case is that now four more people are in jail and the inmates connected with the smugglers will lose eligibility for early release –all because they didn’t consider that drugs and seven pounds of chicken wings would trip a sensor,” MDOC Commissioner Burl Cain said.