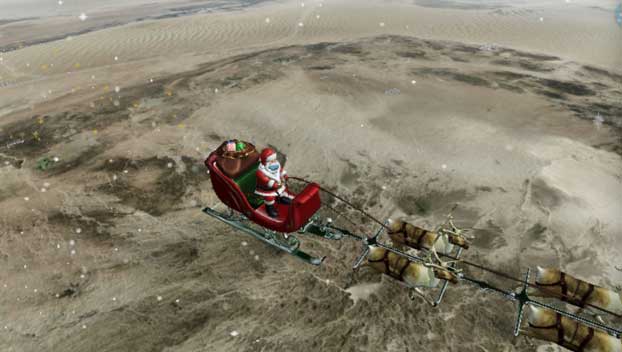 The U.S. military is tracking an elderly man with a white beard and a large belly who goes by the name of Saint Nicholas.

In fact, this is a Christmas tradition going on its 65th year. The North American Aerospace Defense Command, a joint U.S.-Canadian operation that protects the skies over both countries, has tracked the fabled jolly old man since a child mistakenly called the base in 1955, asking to speak to Santa.

The base in Colorado Springs, Colorado, used to monitor for signs of a nuclear attack. But this year, officers at the base are making sure the coronavirus pandemic won’t sideline Santa Claus and his reindeer from, as the storybooks say, delivering gifts to children around the world.

While the Santa tracking operations center usually has around 1,500 volunteers fielding calls from around the world, this year they have scaled back because of COVID-19 concerns with few people in the center and many taking calls remotely. With the smaller operation, they have also added a voicemail for callers who don’t reach an operator.

But as cases continue to rise across the globe, it begs the question: Will Santa be able to bring our gifts to us safely?

“Santa Claus has been doing this for many, many years, as you know, and he’s been through pandemics before and challenges all around the globe. I’m one hundred percent confident that Santa Claus knows exactly how to stay safe,” VanHerck said.

Despite a unique Christmas season, the NORAD Commander said they don’t expect any disruptions to the storybook Santa’s schedule.

“We expect Santa Claus will be on time, arrives somewhere between 9:00 p.m. and midnight to each house. I would encourage all children to make sure they’re in bed by 9:00 p.m. so Santa Claus can stay on time,” he said.

His other important message: You can still leave out cookies.

This is VanHerck’s first year tracking Santa. The commander said it’s an honor to be able to interact with people from around the world and be part of a tradition that spans generations.

“Prior to being the Commander of NORAD, I didn’t have an idea of really how popular this really is and how many people have done this for decades from the time they were children until now,” VanHerck said. “And so to continue that tradition is really important.”

VanHerck said he hopes that tracking Santa will bring happiness to families during an unprecedented holiday season and after months of being stuck at home — especially for children attending school remotely and unable to see their friends because of COVID-19.

“We hope it brings some normalcy to their lives and some cheer during the holiday season,” VanHerck said. “So as much as we can bring good tidings, enjoyment to the family and all the children — it’ll be a big success.”