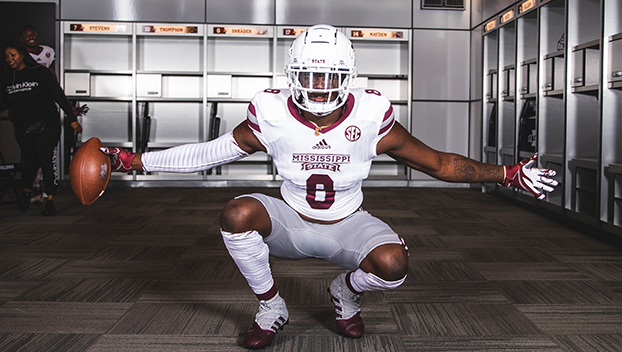 Jordan Davis made a promise to his great grandmother. Even after she died in March, the Mississippi State junior linebacker still made good on it.

Davis was allotted three tickets to Mississippi State’s season-opener against LSU on Sept. 26. He gave one to his mother, Tiffany Harmon. He gave another to his younger brother. He gave the third to nobody.

In keeping it for himself, Davis kept his promise.

His great grandmother told him for years she better have a ticket to the first Division I football game he ever played in. It came six months after her death, but Davis said the ticket never went to waste.

Stepping onto the field as a DI athlete was a feat Davis dreamed of, but it’s also an accomplishment that could have been seen as implausible given his tumultuous background.

Harmon and her two sons were homeless for a time in Jacksonville, Florida.

“We slept nights in the car out of fear,” Harmon said. “We slept in the shelter. We had to go to the food pantry because times had gotten really hard for me and the boys.”

Harmon was let go from her job because of her physical appearance. She was left with marks of an abusive relationship. Just a young child at the time, Davis witnessed multiple instances of domestic violence against his mother by a man she was in a relationship with.

“It had to be one of the darkest moments of my life,” Davis said. “Especially as a young child trying to understand it all. There was a lot of growing up on my own that I had to do. She couldn’t be there for everything with what she was going through.”

But in the end, she was.

Harmon moved with her children to her hometown of Greenville, Mississippi, when Davis was in third grade. She wanted to be independent and persevere on her own, but ultimately the trauma and tough times were too much to endure. They moved back in with her mother and grandmother, the same great grandmother Davis kept his promise for.

By the time Davis started fourth grade, Harmon had rejuvenated mentally and was ready to start anew with her boys elsewhere. They moved to Memphis, where Harmon got a new job, and they settled down in a home of their own.

And that’s where Davis’ story took a turn.

‘IN THE BLINK OF AN EYE, IT WAS ALL TAKEN AWAY’

Harmon drove to Cromwell Elementary School one day with authority.

Davis was in detention. He was still acting up when Harmon spoke with the teacher who called her to come get him. When they walked outside, Harmon saw a little league football team practicing. She had an idea.

“I told him, ‘You know what, I’m going to put you in football,'” Harmon said.

She viewed it as a punishment and a way to instill discipline in Davis, who she described as a “very strong personality child” in his elementary years. Davis saw it as such, too. He was angry and had no interest in playing, but Harmon made him.

The rest is history.

Davis grew into his big frame. He’s listed at 6-foot-4, 260 pounds at Mississippi State. His size and athleticism were enough to earn him a spot in the 2018 Under Armour All-American Game. Playing at Southwind High in Memphis, he signed with Alabama as a four-star recruit and the No. 11 weak-side defensive end in the country a few weeks before he played in it.

Football became Davis’ safe haven. The memories of his troubled past were forgotten every time he stepped between the white lines. But he never truly moved past them, and they were ultimately too much of a distraction to focus on everything he needed to accomplish to fully realize his dream.

“You think that they don’t remember, but they do,” Harmon said. “And I never knew the effect of it until later when he would bring it up, and I was so taken aback like, ‘How did you remember that?'”
The kid who experienced so much hardship was on the doorstep of playing for the best college football program in the country. That door didn’t open right away. Davis was ineligible to enroll at Alabama because of academic issues.

“I was the one that God gave it all to, and in the blink of an eye, it was all taken away,” Davis said.

‘I’M NOT SUPPOSED TO BE HERE’

Davis threw in the towel. Harmon called it a “total meltdown.”

He didn’t want to go to college if he couldn’t play DI ball. Harmon, who was 19 when Davis was born, chose to stop taking classes at the University of Arkansas Pine-Bluff to take care of him. She had other ideas for Davis.

“No matter what, you’re going to get through school and get these degrees because I sacrificed mine for you,” she told him.

It’s a phrase Davis has tattooed across his chest because Harmon drilled it into him as a child. No matter what, Davis wanted to graduate from high school. He did.

No matter what, he wanted to play in the All-American Game. He did.

No matter what, he wanted to play DI football. He had work to do. Harmon helped him out.

She requested his high school transcript and sent it to junior colleges across the South. She called the schools and requested to speak with their coaches. Glenn Davis of Copiah-Lincoln Community

College in Wesson, Mississippi, was one of the most receptive. Co-Lin admitted Davis in a matter of days.

He still wasn’t happy about it.

“I was in so much denial when I first got to junior college,” Davis said. “I was like, ‘I’m not supposed to be here.’ I woke up every morning like I got to get out of here. I was just in shock that I was there.”
Harmon called getting Davis through junior college the most challenging phase of their lives, which says a lot considering what they had been through. But if the player who was once called a “sleeping giant” in an article Harmon read when Davis was a hardly-recruited freshman in Memphis got as far as signing with Alabama out of high school, he could redefine his career at Co-Lin.
That’s what Glenn Davis was there for anyway.

“Attitude wise, he was mad at the world at that point.” Glenn Davis said. “He shouldn’t have been at a junior college. We knew that. But the most important thing for all of us as coaches is we want to see kids graduate and be successful. It was no different with Jordan.”

‘HE TOLD ME HE LOVED ME’

The coaching staff at Co-Lin walked Davis to class numerous times to make sure he was where he needed to be when he needed to be there. He got tired of it and started walking himself.

With more responsibility in his studies came continued success on the field. Davis was able to re-commit to Alabama in the fall of his first season at Co-Lin. He retracted that commitment and committed to Tennessee a few weeks later. The talented linebacker had options again.

But he also had many more months of junior college to go.

Glenn Davis made sure he kept his head in the right place. He’s been coaching since 1982, including 17 seasons as the coach at Co-Lin. He has seen players with stories similar to Davis’ take the wrong turn.

He made sure that wouldn’t happen this time.

“I think he found out that we actually cared about him, and we weren’t just playing him to play him as a football player,” Glenn Davis said. “It was more about him growing up and being a good man and doing all of those kinds of things.”

Davis graduated from Co-Lin and signed to play at Mississippi State last December. He called his coach the day after graduation.

“He told me he loved me,” Glenn Davis said through tears. “When a kid tells you he loves you, that kind of goes a long way. Sometimes people say things they don’t always mean. But I knew he meant that when he said it.”

Much has happened since then. Davis’ great grandmother is gone. His first opportunity to practice as a Bulldog was pushed back because of the COVID-19 pandemic. David even missed two games because of COVID contact tracing.

But he’s still preparing to play in yet another DI football game against Missouri on Saturday. He chose Mississippi State because it felt like home, and home to him was where he spent the good times of his childhood with his family in Greenville.

Home to him is where he’ll always leave a ticket for his great grandmother no matter what, even if she’s watching from above and doesn’t need one.

Owners of a historic house in Central Mississippi were in the process of renovating the residence when the building caught... read more