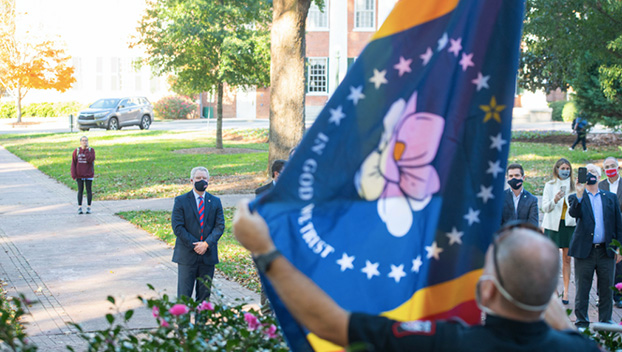 More than one in every 1,000 Mississippi residents died of COVID-19 during 2020. And as the U.S. faced widespread protests over racial injustice, Mississippi legislators voted under pressure to retire a Confederate-themed state flag that had been used for 116 years.

COVID-19
Mississippi detected its first coronavirus cases in March, and the pandemic shook the economy, disrupted schools and scrambled people’s routines. Unemployment claims rose sharply as people lost jobs. Some could work from home, but many still had to report to factories or other places requiring in-person labor. Republican Gov. Tate Reeves set a statewide mask mandate for several weeks during the summer, but at other times set county-by-county mask mandates in places with the fastest spread of the virus. The state health officer, Dr. Thomas Dobbs, repeatedly implored people to wear masks, keep distance from others and skip nonessential gatherings.

RACIAL INJUSTICE
Mississippi legislators voted in late June to surrender the last state flag in the U.S. with the Confederate battle emblem. They did so under pressure from sports leagues, religious groups, business leaders and young activists who said the flag failed to represent a state with a 38% Black population. A commission later recommended a flag with a magnolia, and voters approved that design in November. The flag change was part of a widespread reckoning over racial injustice. In July, a Confederate soldier statue was moved from a central spot on the University of Mississippi campus to a cemetery that’s still on campus but is more remote — a change that was years in the making. Confederate monuments at courthouses also came under scrutiny, with supervisors in a few counties voting to move them and supervisors in a few other counties voting to keep them. Mississippi voters updated the state constitution by erasing a complicated system for electing statewide officials; the system that had been set during the Jim Crow era.

PRISON PROBLEMS
The U.S. Justice Department announced in February that it was investigating Mississippi’s prison system, weeks after violent outbursts killed some inmates and injured others. The system has struggled for years with short staffing and tight budgets. Burl Cain, a former warden of Louisiana’s Angola prison, became the new corrections commissioner in Mississippi and said he would improve prisons with “good food, good praying, good playing and good medicine.”

HUMAN SERVICES SCANDAL
Former Mississippi Department of Human Services director John Davis and the others were indicted on state criminal charges in what Auditor Shad White called a “sprawling conspiracy.” White said in February that investigators believe at least $4 million in federal welfare money was stolen. The money was meant to help the needy, but at least $48,000 paid for a luxury drug rehabilitation program for a former pro wrestler, according to the indictments, which also alleged a politically connected nonprofit administrator and her son took money. White said in May that former NFL quarterback Brett Favre, who lives in Mississippi, had repaid $500,000 that the Department of Human Services paid for multiple speeches where Favre didn’t show up; he owed another $600,000. Favre was not facing criminal charges.

SEVERE WEATHER
More than a dozen tornadoes blasted through Mississippi on Easter, killing at least 14 people and damaging about 1,400 homes and 80 businesses. The National Weather Service said one of the tornadoes was the widest ever recorded in the state; it was 2 miles (3.2 kilometers) wide and stayed on the ground for about 68 miles (109.4 kilometers), from Jefferson Davis County to Clarke County in the southern part of the state. The storms were part of a wider outbreak of severe weather across the South. Mississippi had some deaths and damage during an active hurricane season, but was not hit as hard as Louisiana or Texas.

SENATE REMATCH
Voters on Nov. 3 chose incumbent Republican incumbent Cindy Hyde-Smith over Democratic challenger Mike Espy for a six-year Senate term. It was a rematch of a 2018 special election that Hyde-Smith also won. The first race was to finish a term started by Republican Thad Cochran, who resigned in early 2018 because of health concerns. Hyde-Smith was the first woman to serve as Mississippi agriculture commissioner, and then-Gov. Phil Bryant appointed her to temporarily succeed Cochran. That made her the first woman to represent Mississippi in Congress. During the 2018 election, Hyde-Smith praised a supporter by saying she would attend a public hanging if the man invited her. Espy seized on that to say that Hyde-Smith was ill-equipped to represent a diverse state. In 1986, Espy became Mississippi’s first Black congressman since Reconstruction. He later served as U.S. agriculture secretary under President Bill Clinton. During the 2020 campaign, Hyde-Smith declined to debate Espy.

MEDICAL MARIJUANA
Mississippi voters on Nov. 3 approved a medical marijuana initiative over objections from many state officials and public health leaders. The initiative specified that the state Health Department has until mid-2021 to establish a program. But Madison Mayor Mary Hawkins Butler filed a lawsuit that could threaten the program before it is created. Her lawsuit argues that Initiative 65 improperly landed on the ballot because of the way signatures were gathered. The Mississippi Constitution says no more than one-fifth of the signatures for an initiative may come from any congressional district. That was written when Mississippi had five districts, but now has four. An attorney general’s opinion had said an equal number of signatures should come from each of the four districts. The lawsuit argues that the initiative process in the constitution must be updated.

CURTIS FLOWERS
Mississippi Attorney General Lynn Fitch announced in September that she would not seek a seventh trial against Curtis Flowers, who was freed from prison in December 2019. A district attorney put him on trial six times in the 1996 killing of four people at a Winona furniture store. Flowers was convicted multiple times, but the U.S. Supreme Court threw out the most recent conviction in June 2019, citing racial bias in jury selection. American Public Media’s “In the Dark” podcast investigated the case and recorded an interview with a witness who recanted his own testimony against Flowers. The attorney general’s office said in September that prosecutors no longer had credible witnesses. Flowers said in a statement: “Today, I am finally free from the injustice that left me locked in a box for nearly twenty three years.”

YAZOO PUMPS
The U.S. Army Corps of Engineers took steps to revive a flood-control project that proposes massive pumps to remove water from the Mississippi Delta. The Corps reversed its own previous stance that pumping out floodwater would harm wetlands. It said pumps would decrease the depth and duration of flooding in the rural Yazoo Backwater Area, and that rainfall would keep this part of the Delta from drying out. Conservation groups criticized efforts, saying the project would hurt the environment to help agribusiness. The project has bipartisan support in Mississippi’s congressional delegation.