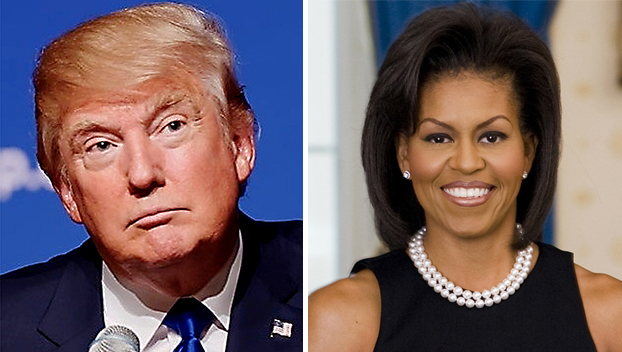 President Donald Trump and former first lady Michelle Obama were named as the most admired man and most admired woman in 2020.

Trump’s first-place finish ends a 12-year run as the most admired man for former President Barack Obama. Trump tied Obama last year before edging him out this year.

Meanwhile, Michelle Obama ranks as most admired woman for the third year in a row. Vice President-elect Kamala Harris is second.

The selections were part of an annual Gallup poll which asks Americans to name, without prompting, which man and which woman living anywhere in the world they admire most.

When the sitting president is not the top choice, it is usually because he is unpopular politically. That was the case in 2017 and 2018 when Trump had 36% and 40% approval ratings, respectively, and finished second to Obama as most admired man.

Even though Trump is similarly unpopular now his dominant performance among Republicans, contrasted with Democrats splitting their choices among multiple public figures, pushes him to the top of the 2020 most admired man list.

The Rev. Billy Graham, who passed away in 2018, finished among the top 10 a record 61 times during his life. Former President Jimmy Carter is the living man with the most top 10 finishes — 29 — putting him behind Graham and Ronald Reagan for third all-time. Carter finishes just outside the top 10 this year but made the 2019 list.

Just as men who were president have dominated the most admired man list, women who were first lady have commonly been named most admired woman. Gallup has asked the public to name the woman they admire most 71 times since 1948, with either a current (18) or a former (39) first lady winning a total of 57 times. That has been the case every year since 1997, with Hillary Clinton accounting for most of those — but Michelle Obama (2018 through 2020) and Laura Bush (2001) also finished first during that time span.