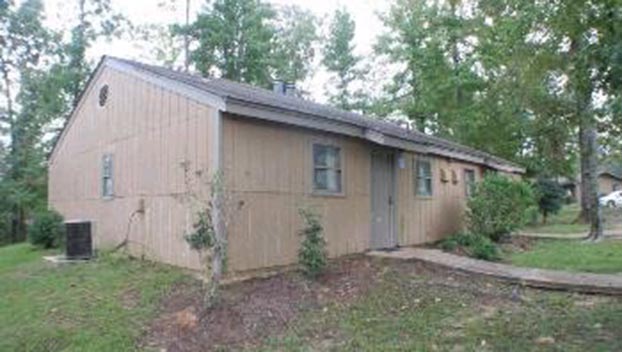 A cabin at Holmes County State Park, which is ‘closed until further notice’ for repairs, according to the state parks website. Mississippi’s parks have suffered years of underfunding and lack of maintenance. (Mississippi Today)

Lawmakers are trying to figure out how to revive Mississippi’s state parks, which have suffered from years of budget cuts and neglected maintenance.

But the price tag to bring the state’s 25 parks (three of which are run by local governments) up to snuff is an estimated $147 million. Plus, millions more a year would be needed to keep them up — prompting discussion of privatization and a search for other options, with a tax to fund parks likely a nonstarter in the Legislature.

State parks spending has been cut by nearly 60% since 2000, and staffing by 70%. The Mississippi Department of Wildlife Fisheries and Parks lacks manpower and money for even routine maintenance. The initial legislative budget recommendation for the coming year would cut MDWFP another $900,000, or by about 15%.

“We are at a crossroads,” said Robert Taylor, chairman of the Mississippi Commission of Wildlife, Fisheries and Parks. “We’ve got to fund them to fix the crumbling infrastructure — have parks we can be proud of — or look at different things. But something has got to change.”

Most of the state’s 600 structures in its parks are in need of some repair — from major to minor, said Jennifer Head, parks director for MDWFP.

This comes as other states cash in on state park tourism, with the COVID-19 pandemic driving demand for RV-ing, camping and outdoor vacationing and recreation.

Alabama privatized one of its state parks that it had closed because of budget cuts. A few states have sold park land or solicited large private developments.

“We have a jewel in the rough,” Mississippi Lt. Gov. Delbert Hosemann told Mississippi Today. “But we don’t have our parks up to the standards we would require for our people to use them, and further, they are not up to the standards of surrounding states which have more amenities … We are leaving money on the table with the tourism industry, and this is part of the face of Mississippi. People come through, see a park that’s run down and they can’t hook their RV up, and they get the same impression about us.

“It’s time for us to take a clear, long look at this,” Hosemann said.

But Hosemann noted the state doesn’t have an extra $147 million on hand to make repairs.

Sen. Neil Whaley, chairman of the Senate Wildlife, Fisheries and Parks committee, held a committee hearing on the issue last week. He said lawmakers are still in fact-gathering mode and are looking at all options. This includes possible privatization of parks — either having private interests take over operations or just some some services — which has been a controversial subject in the state and with federal and other states’ parks.

But Whaley said lawmakers must first research legal issues with any privatization, with many parks built years ago by the Civilian Conservation Corps or purchased with federal money that could cause legal entanglement.

“This is all theoretical — we don’t even have a plan yet,” Whaley said.

Privatization of parks has drawn fierce debate nationwide and in Mississippi. Opponents fear private developers would “cherry pick” the best state parks that could turn profits leaving others neglected, or that privatization would turn parks into expensive resorts and limit public access.

“Absolutely, there is concern that if they’re privatized, are people going to be able to afford to get in there if they start putting high-end developments like hotels and condos?” said Louie Miller, director of the Sierra Club of Mississippi. “Where would that leave the average Mississippian who wants to vacation for a week in a state park with their family? There’s not a lot of public lands in Mississippi, and this was an investment by the taxpayers in state parks through the years … I’m not saying there’s no room for public-private partnership … but privatizing just for someone else’s gain needs to be looked at in the hard light of day.”

Hosemann, Whaley and others say whatever is done with state parks, lawmakers will preserve their affordability and accessibility for citizens.

“These parks belong to the people of the state of Mississippi, and I’m for finding solutions that perpetuate that,” said House Wildlife, Fisheries and Parks Chairman Rep. Bill Kinkade. “… I think we all advocate that we need new, creative ways to fund our parks system, and some form of privatization is inevitable — but not wholesale privatization.”

Kinkade said bike, kayak and other rentals, for instance, could be privately operated. The state park system is already signed on with a national reservations systems for cabins.

One major expense for Mississippi parks is that MDWFP is responsible for all utilities — roads, electrical services, water and sewerage — inside parks. There has been some discussion of asking power companies, co-ops and other entities to help with this infrastructure.

Hosemann said that, as former secretary of state, he has a record of championing public lands as he led the state’s acquisition of Cat Island off the Coast and thousands of acres statewide. He said he would oppose any privatization that restricted public access to parks or raised prices drastically.

“Enlarging and improving our public spaces has been a goal of mine, and I intend to pursue it further,” Hosemann said.

This story was reprinted with permission from Mississippi Today. Click here for a link to the original story.

More than 17,000 doses of vaccine already administered in…