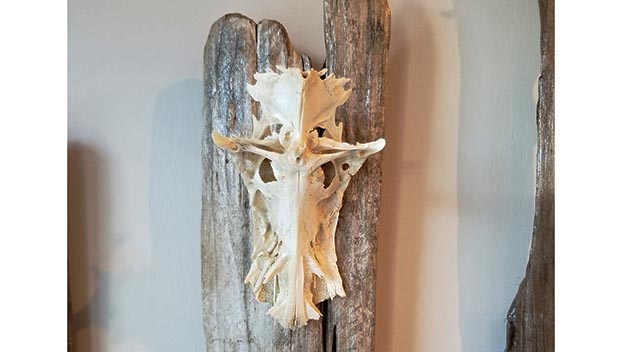 A Mississippi coast man and his daughter are creating religious pieces of art with gifts from the sea and at the heart of the pieces are, of all things, catfish skulls.

“We’ve always been treasure hunters,” said Sonny Schindler of Diamondhead. “She likes to fish, but we both like to explore.”
Living on the coast, there are plenty of things to see. There are beaches to walk and islands to explore. It’s something Schindler and his daughter, Margot, 11, enjoy.

“I like going on the beach and looking for driftwood with my dad,” Margot said. “We find shells and if we’re lucky we find creepy abandoned toys.

“One time we found a message in a bottle. It was a drawing of a boat. I think it was from a little kid because it had a bunch of misspelled words.”

The two sometimes find the skulls of saltwater catfish, which differ from those of freshwater species and are surrounded by legend.

“The story I was always told was of all the creatures in the sea, the catfish is the most hated and looked down on,” Schindler said. “So, God goes and puts his imprint on it just because it needed the most help.”

The imprint is on the underside of the skull. The bones are shaped like a crucifix. Because of that, they are sometimes referred to as crucifix fish.

The skulls also sometimes make a rattling sound when shaken. The sound comes from otoliths, or ear stones, which provide fish with balance. Schindler said one legend states the sound represents the breaking of the tip of the lance used to pierce Jesus’ side when he was crucified. Another states it’s the sound of dice being rolled as Roman soldiers gambled for Jesus’ clothing.

On the tops of the skulls what appears to be a Roman soldier’s shield is present.

“The most hated, cursed fish in the sea has that imprint,” Schindler said.

FROM BEACH FINDS TO COTTAGE INDUSTRY

Schindler operates Shore Thing Charters, a fishing guide service out of Bay St. Louis. Among the various packages his business offers are multi-day fishing trips that include stays at a house on Cat Island.

About four years ago the two decided to create something to add to the home’s beach-themed décor. They took a piece of driftwood he’d found, mounted a saltwater catfish skull on it and hung it on a wall.

Soon after a client saw it and asked Schindler to make one for his wife, who owns an art and gift store in Pass Christian.

“We made one for him and she called almost immediately,” Schindler said. “She wanted more for her store. We made a few, but she called a couple of days later wanting more. Miss Beth was really the driving force behind this.”

Miss Beth is Beth Cash, owner of Art Alley in the Pass. She said it was love at first sight when she saw what Margot and Schindler were creating.

“I loved it because it brought back the memories of my childhood,” Cash said. “We would find these little crosses on the beach and tried to clean them up, but we never did anything with them. I’d never seen anything like what Margot was making.”

“The customers all just love it, too,” Cash said. “Some of them have lived here their whole lives. It brings back their childhood on the coast.

“We have customers come in the store that are in their 80s and they talk about them. They’ve never seen them finished like this on the driftwood and on the oyster shells. The story about the cross is cool, too — the legend behind it. People just love it. Who knew a catfish could do all this?”

The two walk miles of beaches in search of materials. Although some of the skulls are found, those are not enough. So, Schindler uses some of the catfish he catches to bait crab traps and allows nature to do much of the cleaning.

“The easiest way and the less smelly way is to put them in a trap,” Schindler said. “The crabs and little pinfish and sea creatures eat them.”

Afterward, the skulls are cleaned, bleached and given a clear coating. The driftwood is cleaned and coated as well.

“None of it’s hard, it’s just so time-consuming,” Schindler said. “Margot is lucky she has such a cheap labor-force working for her.”

The cheap labor is important.

“All the profits go into her college fund,” Schindler said.

Margot said she enjoys making the pieces because she’s spending that time with her father. She also enjoys drawing and painting, so the creativity is fun. Another aspect she likes is the fact she reserves some pieces to give to teachers and others at Christmas.

“It makes me feel good when I see them smile,” Margot said. “They thank me and say, ‘That was really nice.'”
And what isn’t there to like?

“It’s a special gift,” Schindler said. “You can get someone a tie, but this is not something you’re going to find readily.