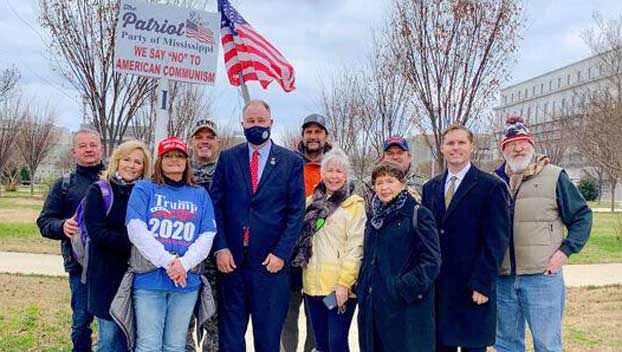 U.S. Reps. Trent Kelly and Michael Guest pose with members of the Patriot Party of Mississippi before a rally on Wednesday in Washington, D.C. Later participants in the rally stormed the U.S. Capitol. (Photo via Facebook)

A group called the “Patriot Party of Mississippi” traveled to Washington to participate in a Wednesday rally that later grew into a violent mob that stormed the U.S. Capitol — an effort to protest and overturn Democrat Joe Biden’s election over Republican President Donald Trump.

Before the pro-Trump violence broke out, the small Mississippi group was greeted by two of Mississippi’s most powerful politicians: Republican U.S. Reps. Trent Kelly, the highest-ranking military officer in Congress, and Michael Guest, who represents the state’s 3rd congressional district.

A photo of the group with the congressmen was published in the Greenwood Commonwealth newspaper and is circulating on social media. Mississippi Today reached out to staffers for Kelly and Guest to ask about the meeting.

Kelly’s staff organized the Wednesday morning meeting and invited Guest to meet with the group at a park adjacent to the Cannon congressional office building, a staffer for Guest told Mississippi Today.

“It wasn’t anywhere close to where the president was speaking or where any active protest was going on,” said Rob Pillow, Guest’s communications director who attended the meeting. “(The congressmen) weren’t out at a protest participating in any of the rallying cries that were going on. It was pretty early morning and was still what appeared to be a normal day.”

Pillow continued: “At that time, (Guest) was still weighing his decision about how he was going to vote in the (electoral college) certification process. The conversation was mainly about procedure, and it probably lasted about 5-10 minutes. They took a photo, and we walked back into the Cannon House office building. That was the extent of it.”

Kelly’s office did not return a request for comment. Later that day, both Kelly and Guest voted not to certify the electoral college votes of Arizona and Pennsylvania — states that elected Democrat Joe Biden over President Donald Trump in November.

The “Patriot Party of Mississippi” is one of several similar groups that was formed on Facebook in the last week of December 2020. The group used tags from high-profile conspiracy theorists on right-wing and white nationalist websites and social media pages, and the Mississippi group’s posts invited supporters to “Operation Occupy the Capitol” on Jan. 6, when they vowed to “take back our country from corrupt politicians.”

In the photo with the congressmen, one person held a sign that showed the group’s name. Others wore Trump apparel.

Pillow said that Guest in no way condoned the violence that occurred on Wednesday and highlighted the congressman’s public statements about the matter.

“Like most Americans, he (Guest) is just distraught over what happened on Wednesday,” Pillow said.

After meeting with Kelly and Guest, several members of the Mississippi group later joined the thousands of Trump supporters on the National Mall, one of the group’s members told a newspaper. Hundreds of those Trump supporters later stormed the Capitol.

Many pro-Trump rioters on Wednesday assaulted Capitol Police officers and tore down security barricades on their way into the Capitol. The rioters — many of whom were visibly armed and carrying pro-Trump and Confederate flags — broke windows and pushed through security doors to get inside. They ransacked dozens of congressional offices, trashed the building and breached national security by stealing documents and computers.

During the riot, police locked down both legislative chambers of the building and nearby congressional office buildings. Both Kelly and Guest along with other House members had to shelter in place, and their staffers were in lockdown inside their office buildings. Several high-profile members of Congress were evacuated.

At least five people, including a U.S. Capitol Police officer, had died as a result of the riot as of Friday morning. The moment marked the first time that the Capitol was sieged by a large, violent group since the War of 1812.

It is unclear whether any of the Mississippi group’s members who met with Kelly and Guest entered the Capitol building or broke any laws. Efforts to contact several of the group’s members have been unsuccessful.

One of the Mississippi “patriot” group’s members Susan Spiller, who is the secretary-treasurer of the Leflore County Republican Party Executive Committee, said in an interview with the Greenwood Commonwealth this week that the Mississippi group, made up of people who have “had it” with the Republican Party, was in Washington to show politicians they would not accept the results of the 2020 presidential election.

“They won’t listen to the people, and they’re spending our money, and they’re doing all this type of stuff,” Spiller said. “We own that Capitol building. We are the boss of the people of Congress. We the U.S. citizens pay their salaries, and we’re being taxed for all that but no representation for all that.”

Spiller, who said she did not personally enter the Capitol building on Wednesday, falsely claimed the greater mob wasn’t violent.

When asked her thoughts about the action of the rioters, Spiller paused and told the newspaper, “That’s kind of hard to say… They probably shouldn’t have done that, gone that far, but I really think they wanted to send a message.”

Reps. Kelly, Guest and Steven Palazzo — all ardent supporters of Trump — backed a failed effort of lawmakers who aimed to overturn Biden’s victory by pushing disproven theories and inaccuracies about Arizona and Pennsylvania botching the election process.

Republicans did not have nearly enough votes in the House or Senate to reject the Biden election, and constitutional scholars questioned whether Congress could overturn the results in the first place.

By the time police cleared the Capitol and lawmakers returned to finish the certification process on Wednesday evening and early Thursday morning, several of the Republicans in both the House and Senate who had earlier planned to object to elector certification reversed their positions. Many Republicans even called Trump out specifically for inciting the violence.

But Kelly, Guest and Palazzo, along with Republican Sen. Cindy Hyde-Smith, rejected certification of Arizona and Pennsylvania, the two states that were challenged. Republican Sen. Roger Wicker and Democratic Rep. Bennie Thompson voted to certify the election results in all 50 states.

New coronavirus cases in January on pace to total…