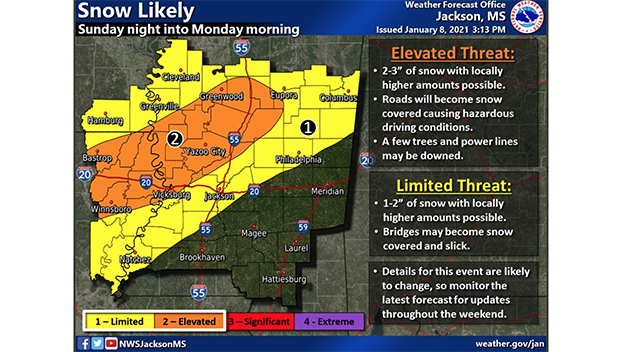 NWS forecasters say parts of the state from Vicksburg to Greenwood and Eupora are under an elevated threat of snow and ice. An elevated threat means that areas are likely to see an accumulation of 2 to 3 inches of snow, making for possible hazardous conditions on highways and bridges.

Other areas in the state including Natchez, Jackson, Greenville an Columbus are under a limited threat of snow and ice. Up to 2 inches of snow is possible in these areas.

Early indications point to a storm that will unleash snow across a wide area, including parts of Texas, the southern Plains and Mississippi Valley.

“At this early stage, it appears that the Dallas and Shreveport, Louisiana, metro areas will not be bystanders for this winter storm, with the potential for up to a few inches of snow to fall with slippery travel during Sunday and Sunday night,” Anderson said.

The last measurable amount of snow in Dallas was about a year ago, on Jan. 11, 2020, when 0.2 of an inch of snow was recorded at Dallas-Fort Worth Airport. On average, Dallas picks up less than 2 inches of snow per year.

With the current projection of the storm’s track and strength, AccuWeather meteorologists say that Lubbock and Abilene, Texas, are in the path of heavy snow from the storm with several inches possible. Lubbock managed to dodge snow from a winter storm on New Year’s Eve, but Abilene received about 3 inches.

Snowflakes may fall in cities such as Austin, San Antonio and Houston, Texas, as well as Lake Charles, Louisiana, and Natchez, Mississippi.

The storm has a significant chance to bring at least some snow to parts of the Tennessee and Ohio valleys and several inches of snow to the southern Appalachians on Monday. Cities such as Nashville, Tennessee, and Lexington, Kentucky, have the potential for some accumulating snow, and the mountains of western North Carolina are likely to add to their snow cover from the first storm that was occurring on Friday.

Memphis, Tennessee, and Jackson, Mississippi, have a chance at picking up an accumulation of snow on Monday.

More than 3,000 fentanyl pills seized, one arrested in traffic stop on Mississippi highway