How much snow did we get? Mississippi residents report accumulation totals from across region 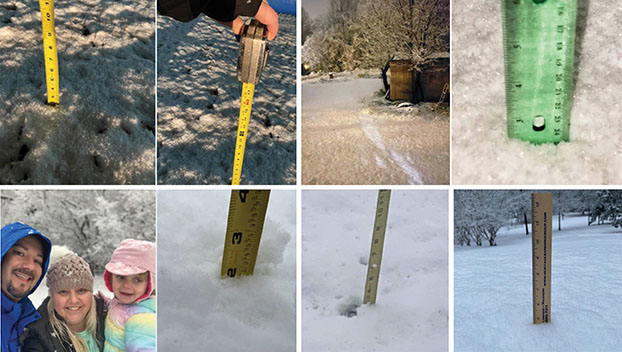 The National Weather Service in Jackson posted a series of photos of Mississippi residents using their rulers and tape measures to report how much snow has fallen on the ground.

A roundup of some totals reported from state residents include:

Wow! More than 3.0” of snow has accumulated in Holmes County ☃️

Got a solid 2 inches of snow in New Hope in Lowndes County and it’s still falling. ⁦@WCBIWEATHER⁩ ⁦@NWSJacksonMS⁩ pic.twitter.com/psRW7dSTL1

Snow has essentially ended in Warren County, but I think they hit the jackpot!! ❄️ A viewer reports 3.5″ of snowfall in downtown Vicksburg on Drummond Street. This is a perfect verification of the forecast/winter storm warning. 📷: Julie LeBlanc @WJTV @NWSJacksonMS #MSwx pic.twitter.com/aNo6hkIu7w

2-3” in Louisville captured by Clark at about 6:15am. Sent via the @WTVAWeather app. pic.twitter.com/IFZff1kW4W

0.4” of new snow recorded during the 12Z(6AM) observation at @NWSJacksonMS. 1.2” total accumulated snow so far. pic.twitter.com/B6bZSWBZFZ