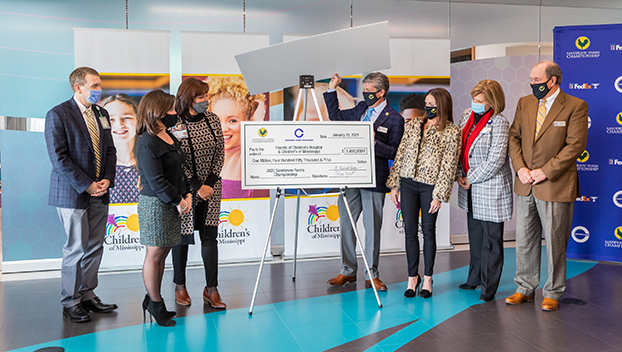 For seven years straight, Century Club Charities has broken its own record in charitable giving, announcing a $1.45 million donation to Friends of Children’s Hospital from proceeds of the 2020 Sanderson Farms Championship.

At a news conference Tuesday, Century Club Charities and the Sanderson Farms Championship presented the $1.45 million check to Friends of Children’s Hospital (FOCH), the fundraising organization dedicated to supporting the University of Mississippi Medical Center’s pediatric health care mission, including the state’s only children’s hospital.

It’s a record-breaking day for @childrensofms and @FriendsofCH_MS! Even during a pandemic, the 2020 @Sanderson_Champ, a @PGATOUR stop hosted by Century Club Charities raised $1.45 million to support specialized health care at the state’s only children’s hospital. pic.twitter.com/FCOXuUJ9Tr

“Today’s $1.45M gift to Friends of Children’s Hospital for the benefit of Children’s of Mississippi, coupled with over $250,000 to other Mississippi charities, makes the 2020 total giving impact of Century Club Charities amount to over $1.7 million statewide,” continued Busby. “We are truly blessed to be able to do what we do for the children, families, dedicated doctors, nurses, and staff who provide miraculous care to 150-175,000 children, 24 hours a day, 365 days a year.”

Since Sanderson Farms, Inc. became the Title Sponsor in 2013, the tournament and Century Club Charities has contributed over $11.5 million to Friends of Children’s Hospital  and other Mississippi charities.

“I am very proud of how our sponsors, volunteers, Century Club members, and staff responded to the challenges COVID-19 presented our team in 2020,” said Sanderson Farms Championship Executive Director Steve Jent. “To be able to follow the opening of the new Kathy and Joe Sanderson Tower with another incredible charitable result speaks volumes about how committed our tournament constituents are to providing Mississippi’s children with world-class healthcare, no matter what obstacles are put in our path.”

“At this very moment, there are children upstairs in this remarkable Kathy and Joe Sanderson Tower receiving life-saving treatment. That would never have been possible without the unwavering commitment that Century Club Charities has shown year after year, since 2016, to supporting Friends of Children’s Hospital in our quest to raise the dollars necessary to help make it happen,” said Melanie Morgan, Chair for Friends of Children’s Hospital. “Every business and individual who supports the Sanderson Farms Championship and Century Club Charities can be proud of the impact their investment has made for current and future generations of children to be cared for in this magnificent facility.”

The Sanderson Tower more than doubles the square footage devoted to pediatric care at the University of Mississippi Medical Center. The state-of-the art facility includes two floors of private neonatal intensive care rooms where parents can stay with their babies as they grow healthier, a dozen advanced surgical suites, and a floor of private pediatric intensive care rooms. A pediatric imaging center and a multidisciplinary outpatient specialty clinic are also included, as is a parking garage nearby.

Badges, ammunition and other equipment from a Mississippi police department were discovered when a Florida stopped a former police officer... read more