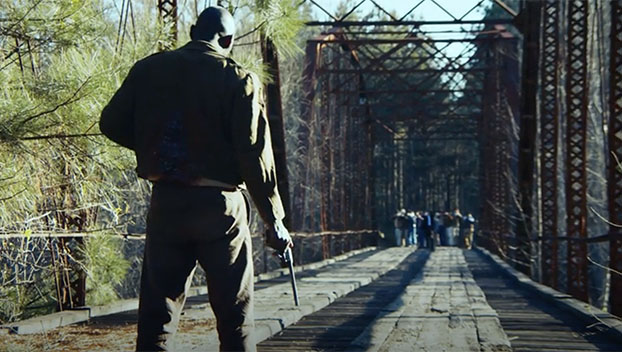 From a juke joint owner on the run to tales of the Dixie Mafia operating on the Gulf Coast, Mississippi has quite a few stories to tell, and director/filmmaker Travis Mills is helping to tell them.

Mills’ latest feature film, “Texas Red,” opens locally on Feb. 5 at Cinemark Theater in Pearl. Tickets are sold out for the Feb. 5 and 6 showings, but are still available for the Feb. 12 showing.

Drive-through screenings of Texas Red also will be shown on Feb. 25 and 27, prior to Oxford Film Festival in March.
The movie is one of 12 westerns that Mills shot in 2020, and one of several movies the Ecuadorian-born director has filmed in the Magnolia State. He co-wrote the film with D.M.M. Simonton.

Mills says he was attracted to the legend of Texas Red because it’s a true Mississippi story.

“I was immediately taken by the story of outlaws and lawmen set in a different time than the Old West,” he said. “You can see the side of the African American people who are on the run, and also the white lawmen, some of whom are just trying to do their jobs.”

Texas Red is the true story of a Black juke joint owner who was accused of several robberies in Franklin County.

“His cabin was raided by some white citizens who were unhappy with him,” Mills said. “They raided his cabin that night without a warrant, a fight broke out, someone was hurt and from there, a giant manhunt was started for this guy.”

The hunt eventually went through several counties, and numerous local lawmen, the FBI and National Guard got involved.

“It’s still not confirmed whether Texas Red and his partner, the Oklahoma Kid, were robbing places or not,” Mills said. “Who knows if the people who were angry with him made the correct accusations?

“We will probably never know at this point. A lot of history like that is lost,” he said. “It wasn’t confirmed at the time and it can’t be confirmed now.”

“Texas Red” is the second film being released as part of Mills’ 12 Westerns in 12 Months project, a project that his production team took on 2020, prior to the start of the COVID-19 pandemic.

“None of us saw COVID coming,” he said. “When we saw it, we had to change significantly. As we encountered the pandemic, some projects completely changed. Some got pushed to the side and replaced.”

“I’m very proud no one got sick on our sets. Not a single person was confirmed to be infected on any of our 12 western sets.”
In January, Running Wild Films and 12 Westerns LLC released the first film “Bastard’s Crossing.”

Four of the films were made in the Magnolia State and most of them feature local actors.

“I try to cast locally as much as possible. I really think that’s one of the problems with the Hollywood movies made about the South. It’s mostly New York and L.A. actors playing Southern characters; no matter how good their accents are it’s not authentic,” he said. “(We) really try to stay authentic to these characters.”

This year, Mills will be spending his time editing the movies – a process that’s almost as intense as shooting the films – and is working on additional projects, including a TV western series and a movie focusing on the rock-n-roll scene in 1960s Brookhaven.

Mills’ first Mississippi film was “Porches and Private Eyes,” a 2016 flick based in Brookhaven, where three women work to solve a local disappearance, according to the Internet Movie Database.

“That turned into an indie success and led me to make more films,” he said. “I’m just fascinated with the culture of the South.”

One child survived, his mother and two siblings died in Mississippi apartment fire