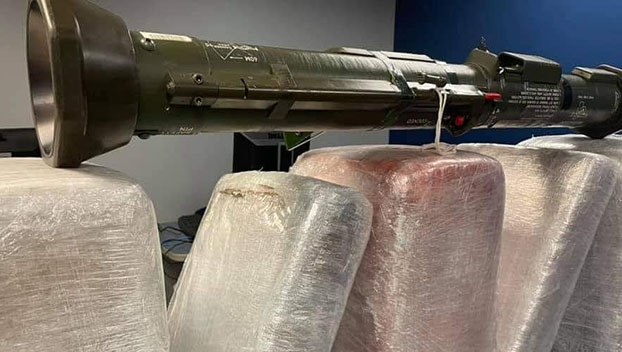 A rocket launcher displayed at a news conference to highlight Jackson’s current problems with guns and violence has some officials calling foul.

The Jackson Police Department is being accused of misleading the public after the department displayed the weapon along with a large number of drugs at a recent news conference, giving residents the impression — some say — that the weapon was recently taken off the streets.

Hind County Sheriff’s Office Capt. Tyree Jones, made the accusations on Facebook. Jones was a commander of the JPD Violent Crimes Division and served as the department’s spokesman.

“This is so disappointing, and to mislead the public about this instrument is very disturbing. There is nothing new about it for the public to be alarmed about and its existence. It’s been off the streets for several years,” Jones said. “Now people are in an uproar about a rocket launcher, or rocket launchers, being in the possession of violent offenders when that is not true. You can’t present an instrument of this magnitude and not give more information about the recovery of it. This is not associated with the violent crimes in Jackson at all.”

James McGowan, a former JPD commander, said he recovered the rocket launcher about 20 years ago during a search warrant.

Public Information Officer Sam Brown told WAPT News in Jackson he had no comment about the rocket launcher.

During the news conference of Tuesday, Brown reported that the weapons and drugs on display were from operations during the stay-at-home order and the coronavirus executive order that was initiated by the mayor.

“A lot of these weapons and drugs were confiscated during these operations,” Brown said during the news conference.

Jackson’s Police Chief James Davis Told WAPT News that the rocket launcher has been in the custody of the department for a long time and that the weapon was among items of drugs and guns that had been recovered in recent months. Davis said the area where JPD keeps evidence is “packed.” Davis said the launcher was moved in place by an evidence tech that moves and was not used to mislead the public.

“It wasn’t that we was trying to tell people we got that rocket launcher off the streets recently. it just happened to be placed in an area where we got all of our evidence, and it was placed there by an evidence tech,” Davis said.