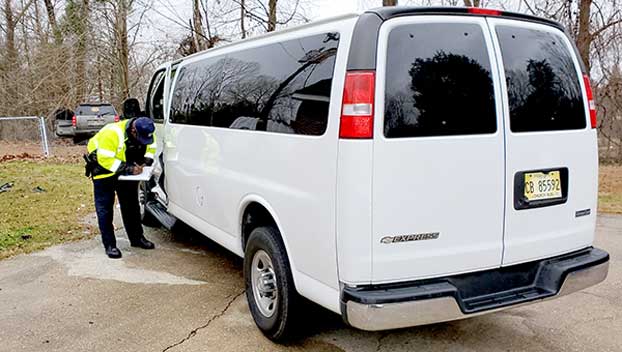 Three juveniles are in custody and facing charges connected to driving a stolen vehicle and leading officers on a chase Saturday afternoon.

Just before 3 p.m. Saturday, officers responded to the area of Demby Drive in reference to reports that a stolen vehicle was in that area. The vehicle, a 2007 GMC Yukon, had been reported stolen from a Jackson Street address Thursday afternoon.

An officer Saturday afternoon spotted the vehicle driving south on Belva Drive. The vehicle then fled when the officer attempted to pull it over, the Vicksburg Police Department said in a release Sunday.

In the midst of the chase, the Yukon collided with a parked vehicle — a church van at Warrenton Independent Baptist Church on Belva Drive. There, the three juvenile occupants in the vehicle jumped out and fled on foot.

One occupant, the driver, was apprehended at the scene.

Officers of the Vicksburg Police Department, along with deputies from the Warren County Sheriff’s Office, participated in a search of the wooded area south of Belva Drive for more than two hours without contacting the other suspects.

Later, at around 6:30 p.m., the other two suspects were taken into custody at their home.

The driver, whose name was not released due to the fact he is a juvenile, is 13 years old. The passengers in the vehicle, also not named, are 13 and 14 years old.

All three juveniles were transported to the Warren County Juvenile Detention Center.