State Sen. David Jordan, the 86-year-old Democrat from Greenwood and veteran of the Civil Rights struggles, said legislation approved Wednesday by the Mississippi Senate on a straight party-line vote could potentially remove “people who look like me” from the voter rolls.

Jordan, the son of sharecroppers who became a nationally known political activist in the 1960s, spoke emotionally from the Senate floor on Wednesday against the bill that Republican authors said was aimed at preventing voter fraud.

“Voter fraud is no major problem in Mississippi,” Jordan said. “I think people who look like me have paid a great price in Mississippi and across this nation to be full-fledged citizens. To bring a bill that could disenfranchise and create problems for people of color to vote and is aimed directly at people like me, people of color, is wrong. We don’t have to do this.”

Senators passed the bill on Wednesday by a vote of 36-16 straight down party lines, with Republicans voting yes and Democrats voting no. The bill now moves to the House for consideration.

The bill’s author Senate Elections Chairman Jeff Tate, R-Meridian, and Republican Lt. Gov. Delbert Hosemann, said the intent of the legislation is to prevent voter fraud by ensuring people who are not eligible voters are removed from the voter registration lists. They pointed out some counties across the state have more people registered to vote than the total population of the county. The voter rolls could include, for instance, people who died and people who moved away from the county and should no longer be on the voter rolls.

“This does not purge you from the voter rolls,” said Tate, a freshman senator and former county elections commissioner. “It allows a trigger for the county to contact those who go without voting.”

Under the bill, Tate estimated that about 250,000 Mississippians would receive a confirmation notice that would result in them being purged from the voter rolls if they did not vote within the next four years or respond to the notice. Others estimated that as many as 600,000 could receive the confirmation notice from county circuit clerks if the bill passed on Wednesday becomes law.

Jordan said the bill was trying to fix a problem that did not exist. During the emotional floor debate of more than 90 minutes on Wednesday, Tate said he was 100% sure voter fraud existed in the state, though he could give no concrete example. Election officials, including Hosemann when he was previously secretary of state, have never provided evidence of widespread voter fraud in the state.

Jordan said the instances of voter fraud, if any, were small and not widespread enough to merit the risk of accidentally removing eligible voters from the voter rolls.

The debate comes in the midst of the recent federal election controversy and efforts on the national level by former President Donald Trump and many Republican officials, including several in Mississippi, to throw out the ballots of tens of thousands of primarily African American voters.

Mississippi, with its sordid, racist history of election intimidation and voter suppression, already has some of the strictest voting laws in the nation. The state is one of just 18 that requires voters to provide photo IDs at their polling places on the day they vote, and qualifying for mail-in voting requires one of three narrow excuses.

Mississippi also has the nation’s strictest early voting laws. In 2020, Mississippi was the only state in the nation that didn’t give all citizens the opportunity to vote early in-person or by mail. Mississippi is one of just five states that does not allow no-excuse voting by mail, but in those other four states, all voters were given the option to vote early during the pandemic.

Tate said there are safeguards in the bill to ensure people are not wrongly removed from voter rolls. People who do not vote over a two-year period would receive the confirmation notice from the county circuit clerk. Voters would then have four years to return the notice. Tate said it would take six to eight years for a person to be purged from the voter rolls.

“The right to vote contains the right to not vote,” said Sen. David Blount, a Democrat from Jackson who worked for years at Mississippi secretary of state’s office.

Under the bill, Blount said someone could receive a notice right after an election, and then six to eight years later opt to vote, knowing they had registered and not realizing for various reasons they had been mailed the confirmation notice, resulting in their ultimate removal from the rolls.

Blount unsuccessfully offered a replacement proposal that could result in people ultimately being removed from the rolls, but only after their names were published to give those who should not be removed time to come forward and verify that they are a registered voter.

Ohio publicly published the names of more than 200,000 people it was removing from the rolls under similar circumstances, and it was found that 40,000 of the people had recently voted and were mistakenly placed on the list, Blount said.

If the Senate bill becomes law and similar mistakes occur in Mississippi, Blount said people who had registered and had the right to vote could be denied that vote.

This story is republished with permission by Mississippi Today. 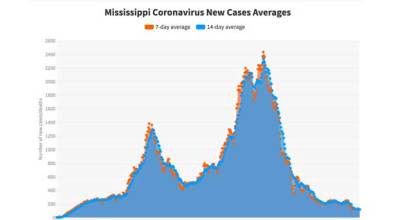 Animal advocates: Have a heart and break the chains…