Officials: Get prepared for ‘coldest temperatures … in years’ 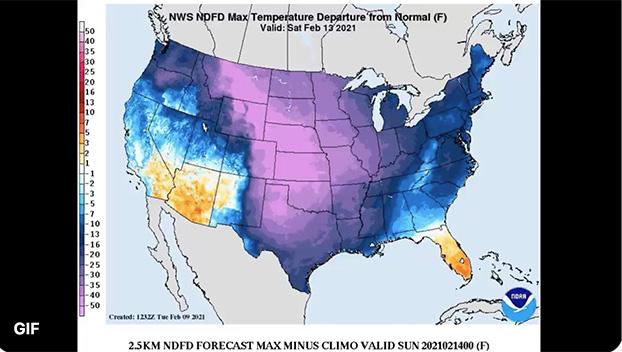 Mississippi residents can expect dangerous cold temperatures and the possibility of frozen precipitation Sunday and Monday, as a cold front moves through the area over the weekend.

“Now is the time to prepare,” Warren County Emergency Management Director John Elfer said. “Make sure pipes and vegetation and vulnerable pets and adults and children are protected. We’re going to have some of the coldest temperatures we’ve had in years.”

Anna Wolverton, a meteorologist with the National Weather Service office in Jackson, said the forecast high for Vicksburg and Jackson Saturday is slightly above freezing with colder temperatures Sunday and Monday.

“Sunday and Monday, it’s not going to get above freezing,” she said. “(For areas in Central Mississippi) Sunday will have a high of 29 and Monday a high of 31. The low Sunday morning will see a temperature of 19 degrees and 18 on Monday.”

Some single-digit wind chills are possible, she said.

TH-F: Cold air begins to move into the area by Thurs. Freezing rain may occur, which could result in light ice accumulation.

Areas north of Greenville and Greenwood are under an elevated threat for dangerous cold this weekend. Those areas are expected to see low temperatures drop between 15 and zero degrees and present problems for pipes and prolonged exposure to the cold for humans and some animals.

While parts of the Delta could see freezing rain Thursday night into Friday morning, Vicksburg will see mostly rain. And although the forecast for early Friday morning shows some freezing rain and ice pellets and sleet, “That’s a low-end chance at that point,” Wolverton said.

As for any possible winter precipitation Monday, she said that forecast is seven days out, “And with any kind of winter system, seven days out is really kind of difficult to pinpoint any winter weather down here. So while we have it in our forecast, we’re putting it in there to give people a heads up that it’s a possibility.

“We’re fairly confident we will see these cold temperatures this weekend and that confidence is increasing,” Wolverton said.

While the forecast for winter precipitation is a question mark at this point, Elfer said people should not be complacent.

“People need to be ready just in case we get ice,” he said. “I don’t mean panic buying, but make sure you have enough supplies just in case. People should already have supplies. If there is anything good about this, it’s we don’t have any severe weather with this.”