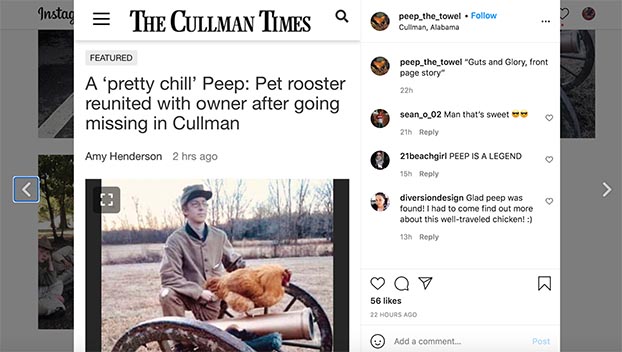 A Mississippi teen has been reunited with his pet rooster after the bird had flown the coop at an Alabama Cracker Barrel on Jan. 31.

Thomas Ramsey, 18, was headed home from a Civil War reenactment in Tennessee, and stopped for lunch in Cullman, Alabama with is friends and his rooster, Peep, on Jan. 31, The Cullman Times reported.

Ramsey is a student at Copiah Academy in Gallman, and founder of the Muddy Rabbits Mess, a 32-member military reenactment group and the largest youth group nationally.

Ramsey has been participating in reenactments since he was 14. The rooster had become his regular companion during re-enactments.

About 30 minutes away from home, Ramsey learned that a man found Peep in the parking lot of the Cracker Barrel in Cullman.

A local farmer drove with Peep to Birmingham where the rooster reunited with Ramsey.

To continue following the adventures of Peep, you can check out his Instagram page @peep_the_towel.