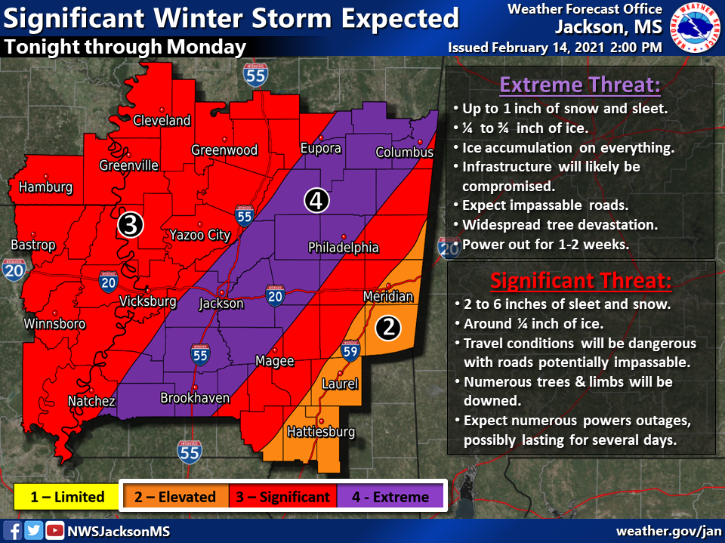 Emergency management officials and weather forecasters were urging Mississippians to avoid travel late Sunday and into Monday morning as a powerful winter storm bears down on the state.

As much as 3/4 of an inch of ice and between 2 to 6 inches of sleet and snow were predicted by the Jackson office of the National Weather Service.

At their 2 p.m. update, NWS forecasters shifted the area they consider in “extreme” danger for ice accumulation more to the east. The new worrisome path extends along a line from Brookhaven up through Jackson and northeast into the Columbus area.

A preview of Monday’s storm began early in the day Sunday when small amounts of sleet, ice and snow began freezing road surfaces in Southwest Mississippi.

Even a tiny amount of ice can cause major travel disruption. But the amounts forecasted for parts of Mississippi for this storm are much more — from 1/4 inch to 3/4 inch of ice.

Experts say anything more than 1/2 inch of ice can be considered catastrophic as that much ice can add hundreds of pounds of weight onto power lines and tree limbs that can fall onto power lines.

The precipitation should clear out of the state tomorrow afternoon and evening, but an extremely and dangerous cold air mass is expected to cross into the state with bitterly cold temperatures and wind chill temperatures.