Mississippi dad fed up after daughter’s rejection from ‘American Idol’ 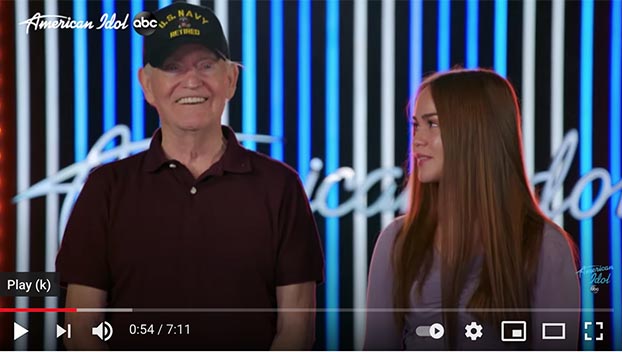 A Mississippi dad and retired Navy officer wasn’t having any of it when his daughter failed to earn a ticket to Hollywood on “American Idol.”

Seventeen-year-old Danica Steakley and her dad  Dan Steakley of Gulfport appeared on Sunday’s episode of the ABC reality series in hopes of making that first step toward stardom.

With his daughter by his side, Dan went so far as to predict that his daughter would win this season. Throughout the taped segment, Dan did most of the talking and answered questions posed to his daughter and accompanied her on guitar.

After Danica auditioned, singing Hank Williams’ “I Can’t Help It (If I’m Still in Love With You),” she received support from the three judges. But she did not receive enough votes to advance. Although Katie Perry voted for Danica and said she thought Danica would learn quickly, both Luke Bryan and Lionel Ritchie said no.

Almost immediately, Dan walked out of the audition room leaving his daughter behind. As he walked away, Dan mocked the judges.

A nonplussed Danica seemed distressed by her father’s behavior, but the teen took the judges’ comments in stride.

“I mean, I’m disappointed, but as a singer, you have to take criticism well, and I understand that,” she said.

“I don’t even know any Luke Bryan songs, anyway, besides ‘Knockin’ Boots,’” Dan said. “Next time … we’ll have her audition for ‘The Voice.’”