Most of Natchez Trace closed because of snow and ice; officials advise finding alternate routes 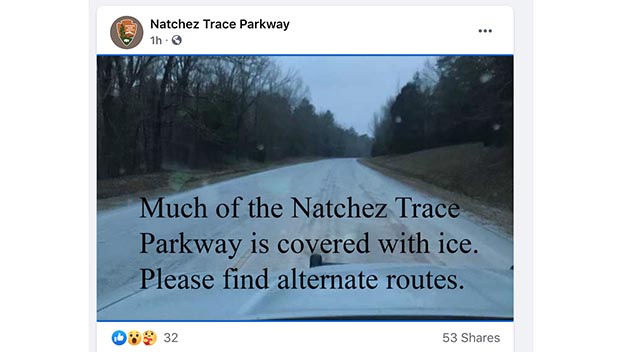 Natchez Trace Parkway officials are asking drivers to use alternate routes as conditions rapidly deteriorate across the entire parkway from Natchez to Nashville.

Officials report the I-22 overpass is icing up. Roads are beginning to be covered and icy as far as the 247 mile marker.

“Please avoid the Natchez Trace Parkway along its entire length. The roads are not cleared or salted. Find alternative routes,” officials posted on social media. “We are advising all individuals to find alternate routes of travel. Individuals who have a wreck or slide off the roadway during this weather event may have to shelter in place for an extended period of time. Emergency personnel may have a delayed response. Roads are almost impassable in the northern and southern sections of the park and will only be getting worse, trees and limbs will come down as the storm progresses.”