Hold on to your thermal underwear, more wintry weather may blast into Mississippi this week 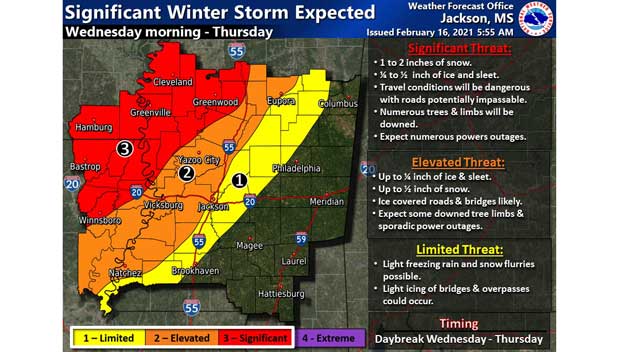 With snow flurries falling on the Gulf Coast during record cold temperatures and some Deep South towns already coated in ice, forecasters on Tuesday said another blast of winter weather could cause still more travel problems and shutdowns.

Northern sections of Mississippi and Louisiana may get another 2 inches (5 centimeters) of snow and ice through Thursday, the National Weather Service said, and travel difficulties could linger since low temperatures are predicted in the teens at night and highs only around freezing during the day until Friday.

The U.S. Postal Service suspended mail delivery in much of Mississippi on Tuesday because of the winter storm, and a crew in Vicksburg, Mississippi, worked to clear ice from a section of Interstate 20 near the Mississippi River bridge to Louisiana. The Mississippi Highway Patrol posted a short video clip on Twitter, showing tractor-trailers halted on the roadway.

Temperatures will warm to the east starting Wednesday from Alabama through the Carolinas, but thousands of students missed at least one day of school because of the cold and icy conditions and health officials had to close sites administering vaccinations for COVID-19.

In rural northwestern Alabama, the town of Haleyville was mostly shut down because of ice that began coating trees and roads on Monday, said Ben Lyle, operator of Lyle Wrecker service. A couple restaurants and a store stayed open, he said, but many of the small manufacturing plants and other businesses that fuel the area’s economy were closed, some because of power outages, he said.

“I don’t look for the situation to improve before (Wednesday),” Lyle said Tuesday. “If it was just snow it wouldn’t be that bad.”

Snow flurries briefly fell during Mardi Gras celebrations that were already tamped down by the coronavirus pandemic in Mobile, Alabama. Wintry precipitation could last into Thursday in northern Alabama, forecasters said, with areas to the west expected to be hit the worst.

More than 120,000 homes and businesses were without power in Louisiana, where the pandemic got an assist from the cold in dampening Fat Tuesday celebrations, and more than 30,000 were in the dark in Mississippi. Another 9,000 utility customers were without power in Alabama, nearly all in a few sparsely populated counties in the north.

Vaccine sites were shut down in Alabama and Mississippi because of the weather, and it wasn’t immediately clear when appointment times would be rescheduled.